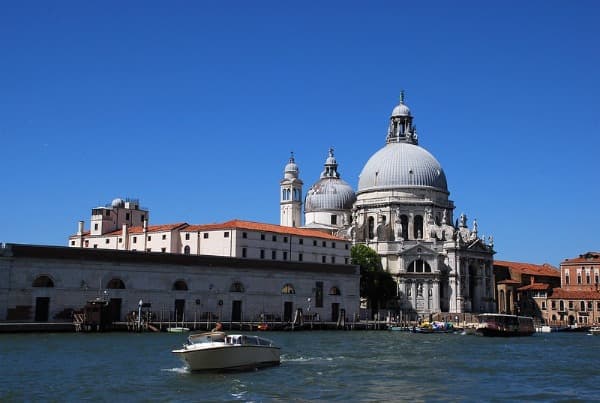 The impressive cathedral on the south side of the inlet to Canal Grande from the south, close to Punta della Dogana (, where there is a museum for contemporary art, which I can recommend.) is called Santa Maria della Salute. This church is the central piece for the most Venetian of all the Venetian holidays, Festa della Madonna della Salute, The Virgin of health festival… or something in that direction, the 21st of November.

The origins of the Feast of Santa Maria della Salute are very similar to that of the Redentore. It’s a story about the bubonic plague, that seemed unstoppable, and in the absence of better ideas, the Venetians prayed to the Holy Virgin, and she helped them and stopped the disease.

It was in the year A.D. 1630 that the plague hit Venice again. Venice was one of the most stricken cities in Europe, having close contact and constant trading with the middle east. The 1630 – pestilence didn’t come from the east though, it came from the west, from inland. The city of Mantova was badly infected and Ambassadors were sent to Venice in a desperate search for help. The Mantovani were put in quarantine on the island of San Servolo between Venice and Lido, but officials from Venice had to talk to them. Obviously, not enough precautions were taken, the Venetians were contaminated, and the weeks after, the deadly epidemic started its terror. 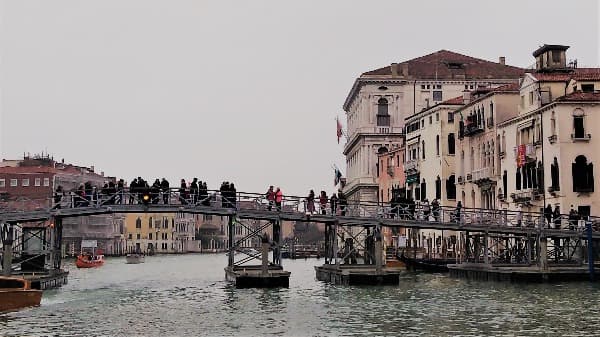 This was a particularly violent bacteria and the deaths were so fast and so unpredictable that many people died where they stood. Within a month the streets and campi were practically covered with dead bodies, and both the Doge and the Patriarch died. The whole summer the terror continued and when all seemed lost and nothing the city decided could stop the dying, the Doge decided to, once again ask the Virgin Mary for help.

In autumn 1630 the city decided to form a Procession in honor of the Virgin. For three days and three nights without interruption, the city proceeded along the alleys and the fields. A few weeks after, the disease was slowing down for the first time in months. So the Doge Nicolò Contarini, just like the case with the Redentore, decided to build a cathedral to pay tribute to the Virgin Mary. He died in April 1631. 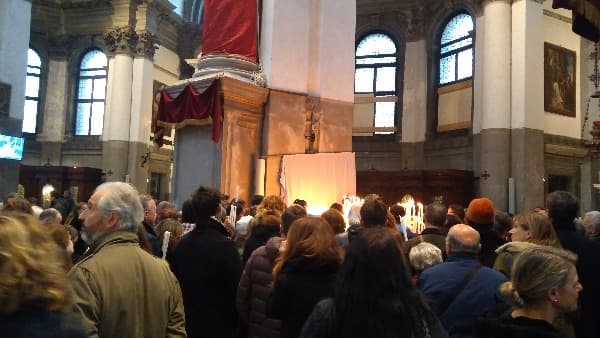 To build the church it took some 50 years, but finally the 21st November 1687 it was consecrated. From that day, every year the Festa della Salute is celebrated right there and a temporary bridge is constructed from the San Marco side to Dorsoduro, just like a bridge from San Marco to Giudecca is set up at Redentore.

The truth about the plague, just as the case with the Redentore-Plague in 1575-1577, was probably that the spreading of the disease naturally slows down after some time because those who remain are immune or at least have better defenses. And in winter the flees, who are the carriers of the bacteria, are slower and they reproduce slower because it’s cold. In Novembre 1631 it was over, and a little less than 50.000 people had died in a year and a half… One-third of Venice’s population.

Anyway, Venice got another masterpiece of a cathedral, and they got a traditional holiday that has lived on for 400 years.

How the Salute Village Feast became a local holiday

This holiday of Santa Maria della Salute is the most Venetian of all the local holidays. It has an interesting story also in reasonably modern times. Every city has its own patron saint. Venice has Saint Mark’s, and by chance, it happened that the national holiday The Liberation Day, in remembrance of the end of world war 2, falls on that same day, April 25, as the holiday of Saint Mark’s. So, as the Venetians can’t take advantage of their Saints holiday, as it is already a national holiday, they have, by law, the opportunity to choose another local holiday to celebrate instead of the Saint Mark’s festival. And Venice chose La Festa della Salute, and so we are free from school and job to walk over to the Salute and hold mass without the employer or headmaster interfering.

Outside the church, there are many stands that sell candles. Small candles, big candles and some candles so long and heavy that they are difficult to even carry. The tradition is to buy one and then go into the church and lit it for the Virgin Mary.

If you don’t want to attend the sermon, there are still lots of street food, sweets, chocolate, cotton candy and mulled wine. You can find street artists, and children can buy balloons… All in a normal village feast style way. It’s kind of special to us. Venice is so full of tourists, and so full of artificial attractions, that it’s nice to have something that’s really genuine. It’s something that makes you feel as if Venice was just like any other small town, just like Rovigo, Conegliano or Pordenone. And it’s a very nice, cool, laid back atmosphere.

And the Santa Maria della Salute holiday is in November 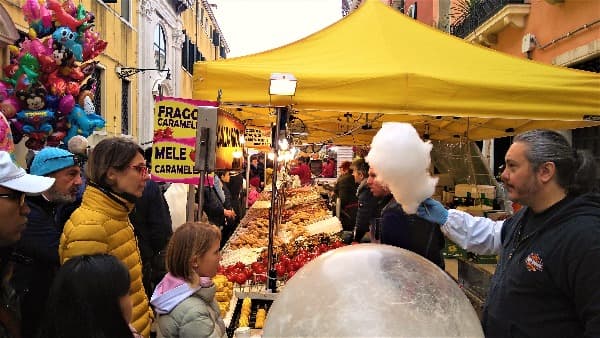 Another reason why it’s that local, genuine feeling is obviously that it’s in late November. That’s one of the very short low-season periods in Venice. So there aren’t all that many tourists around. Plus the fact that many come from the mainland just to celebrate la Festa della Santa Maria della Salute. From Mestre, Marghera and even from Rovigo, Conegliano, and Pordenone.

But it’s different. And the reason it’s different is that it’s so ordinary… An ordinary village feast in Venice, where everything else is out of the ordinary. 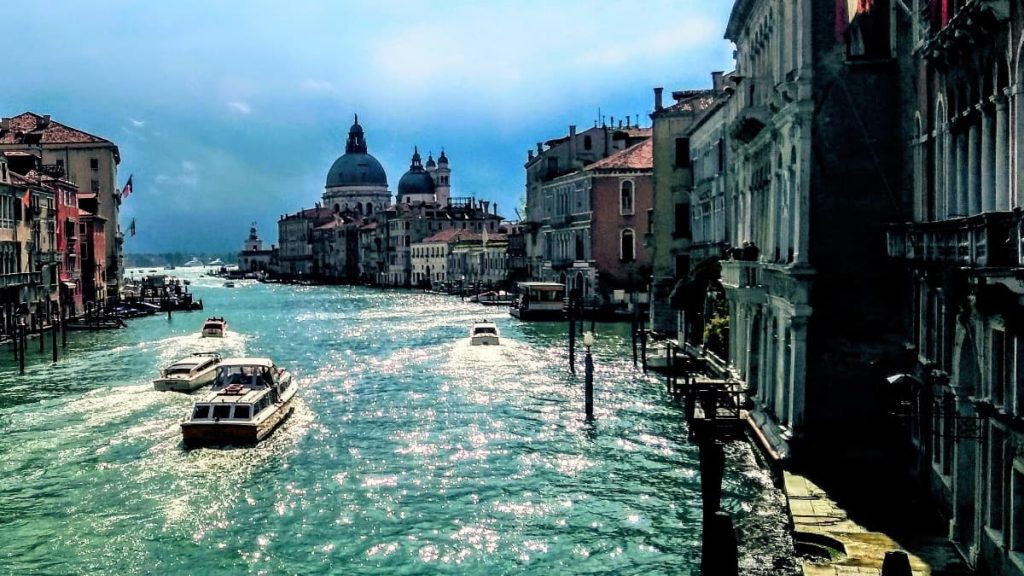