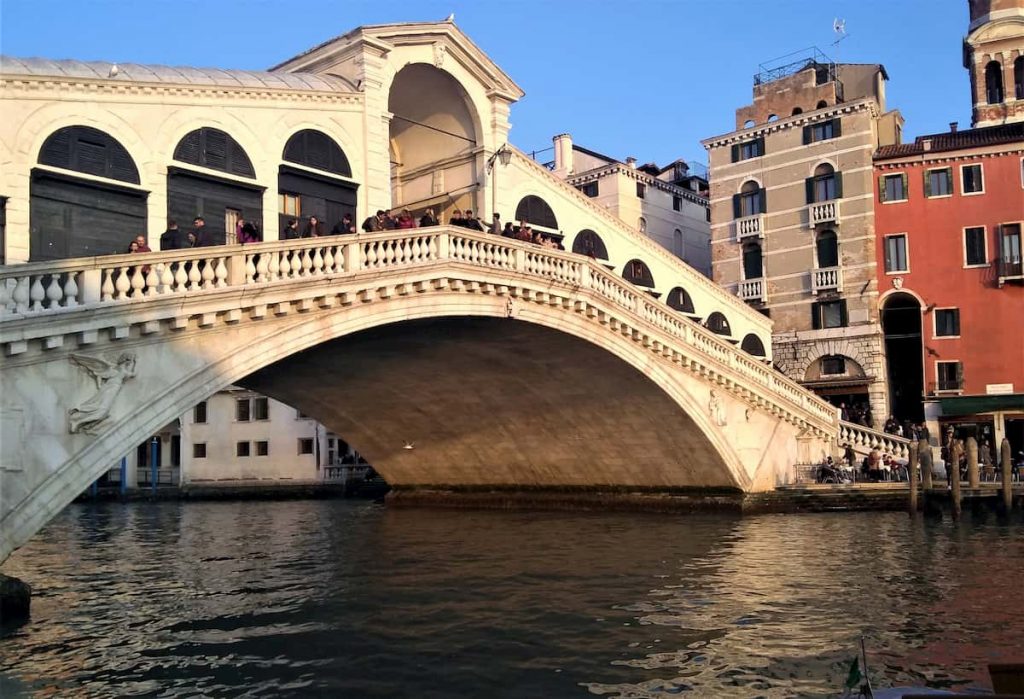 When was the Rialto Bridge built… And why?

The project was started in 1588 and completed in 1591, The Rialto Bridge was the only Bridge over Canal Grande in Venice until the 19th century when the Accademia Bridge was built.

The reason to connect the two islands at that precise point was obviously that at Rialto, the food market resided, and the Venetians needed their fruit, vegetables, fish, and meat every day.

Before the current bridge, many other constructions have connected the San Marco side with Rialto The first one was made already in 1180.

The need to join the banks of the canal to make the Rialto market more accessible led to the construction of a simple bridge of boats already in 1180, by Nicolò Barettiero. It was a floating bridge and it was by no means ideal, as it blocked the traffic on the canal. The name Quartarolo came from the fee the pedestrians had to pay for the crossing. Quartarolo was one-fourth of a Denaro… Anyway, a small coin. 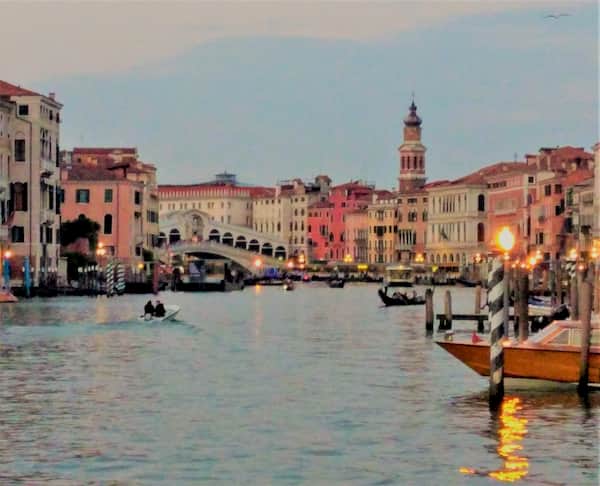 The floating bridge was a problem for the shipping and in many other ways, it wasn’t practical. So a new bridge was built in 1264. This time the Venetians opted for a fixed wooden bridge  The structure consisted of two inclined ramps that joined at a mobile central section, which could be raised to allow the passage of taller ships. Given the close association with the market, the bridge changed its name and became Ponte di Rialto, the Rialto Bridge in Venice.

In 1310, Bajamonte Tiepolo tried to overthrow the Doge in a Rebellion. It didn’t work out as planned and after he and his fellow revolutionaries had fled the scene, they crossed the Ponte di Rialto and after having done so he tried to tear it down and burn it to prevent the guards from following. The bridge was severely damaged but it was rebuilt soon after.

It stood up for another hundred years until in 1444 it collapsed when a big crowd gathered on top of the bridge to witness The Marriage cortege of the Marquis of Ferrara. 20 people died on that occasion. 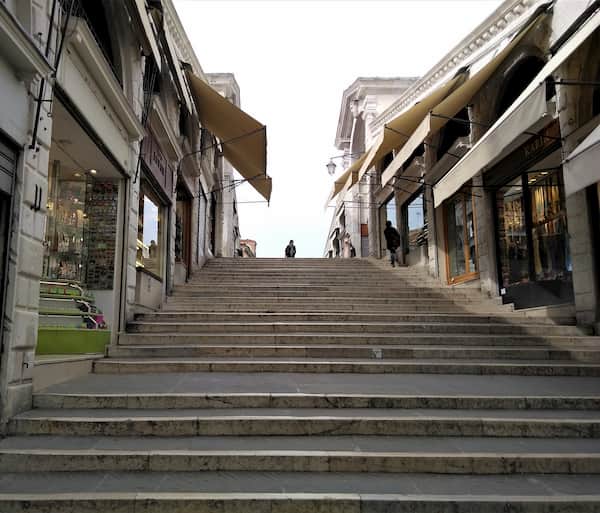 Well, the bridge was rebuilt again, this time wider, stronger and with shops on the side. Much like the present bridge. At this point, the Republic started to be concerned about the high cost for the maintenance and the evident fragility of the wooden structure.

A stone bridge would be stronger, last longer and resist fire

In 1503 a stone bridge was proposed for the first time, and in the following decades, several projects were evaluated. In 1514 Fra ‘Giovanni Giocondo projected a complete rehaul of the Rialto market. The city had grown and the various parts of the metropolis needed to be bonded together for everything to function in a rational way.

In 1524, another collapse occurred but it wasn’t until 1551 that the Venetian authorities launched a call for tenders for the reconstruction of the Rialto bridge. A commission of supervisors was appointed to validate the proposals. Now they had decided to build the new bridge in stone. 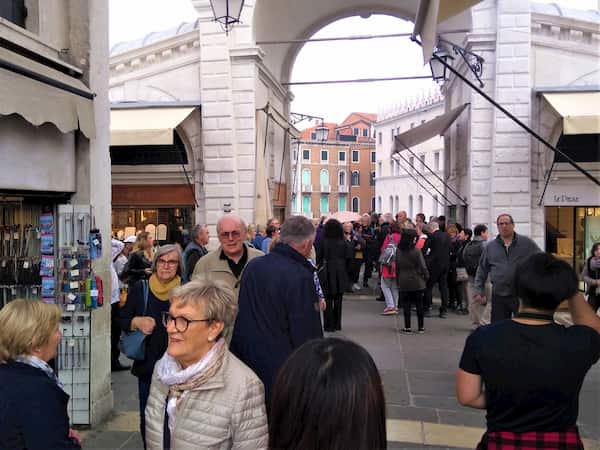 During the second half of 1500 projects were presented by the most famous architects of the time, but only at the end of the 16th century did the doge Pasquale Cicogna announce a competition. Proposals came from architects such as Jacopo Sansovino, Andrea Palladio and Giacomo Barozzi da Vignola, but they all proposed a classic approach with many arches. The competition was re-proposed in 1587 and Antonio da Ponte took part. He proposed a single arc solution and this was the project that was finally chosen.

The Rialto Bridge in Venice was finally ready

The work was completed in 1591, thanks to the help of the architects Antonio, and Tommaso Contin da Besso.

Just like with any other huge financial project, there was some controversy. Antonio da Ponte was seventy-six years old at the beginning of the construction works, and he wasn’t really a supporter of the single Ark option. But his admirable restoration of the Doge’s Palace after the fire of 1577 had favorably impressed the officials.

Antonio da Ponte – The constructer of the Venice Rialto Bridge 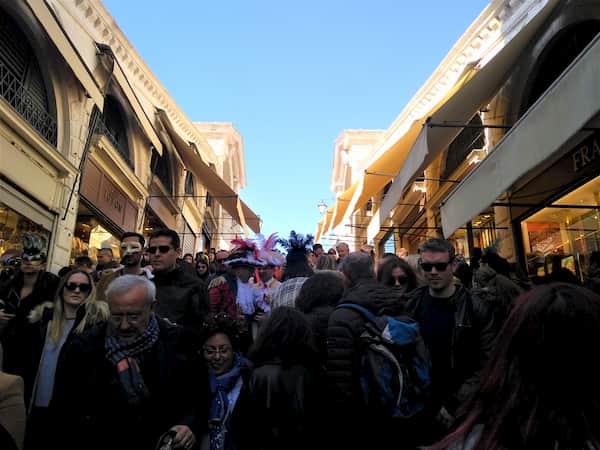 Maybe the Ark was the most difficult thing to build anyway. It is 28 meters wide, 7 1/2 m high and building that kind of a structure in the Middle Ages was a huge enterprise. But building it in Venice with its Foundation of mud was extremely risky.  12000 wooden poles were used 6000 and 1 side and 6000 on the other.

Problems occurred when trying to level the two sides. And since everything in Venice is moving about, great care had to be taken when laying the foundations at the Canal Sides. The central part of the Grand Canal was completely drained for several months during the beginning of the work.

How long and wide is the Rialto Bridge

What to look for.

The bridge is flanked by shops in all its length. Outside the shops, there are more stairs from where you can take some beautiful photographs of the Grand Canal. The southern side, facing the straight canal towards Accademia, is one of the most Instagramable spots of the city. And it’s one of the most crowded. 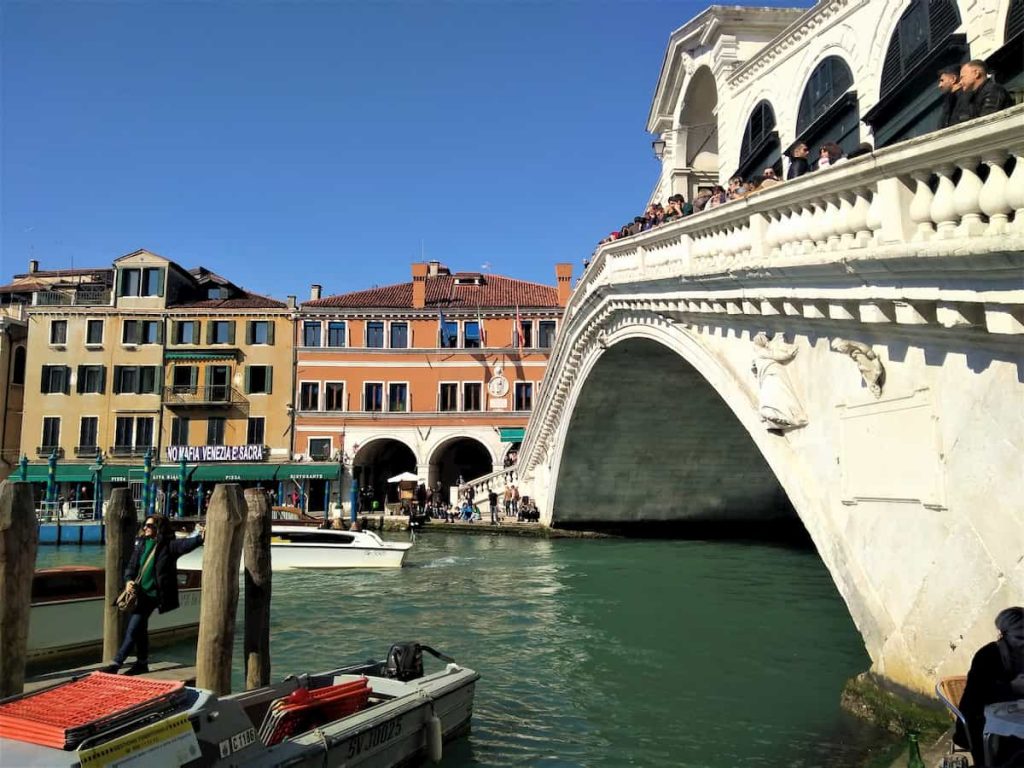 The shops should be of prestigious type only. Actually there’s an old decree that determines who can sell, and what can be sold on the bridge. And it has to be valuable… Gold and silver. Now, that is not the case anymore. The shops are not exclusively jewelry, but the city is moving in that direction. Controls are made, and fines are imposed every now and then to remove some of the most striking tourist traps.

The vagina in flames and the penis with a nail.

The construction of the bridge took only three years but from the first plans till the bridge was ready almost 100 years had passed. This caused a great deal of ridicule and many bad jokes from the Venetians, all eagerly awaiting the new pathway to the other side.

There is a story about an elderly couple who stood gazing at the work-site. As they laughed at the impossible project the man uttered:

A very colorful dialogue and without knowing it they became immortalized in two marble shrines on the Palazzo dei Camerlenghi, coming down from the bridge on the Rialto side and looking to your right.

The first shrine shows the man, Casso (penis), and the second shows the woman, Mona (vagina).

There are other legends about the impossibly long arc. A venture that seemed almost supernatural at the time. The most famous story explains how Da Ponte managed finish the project without everything crumbling.