Directly to the Practical Stuff 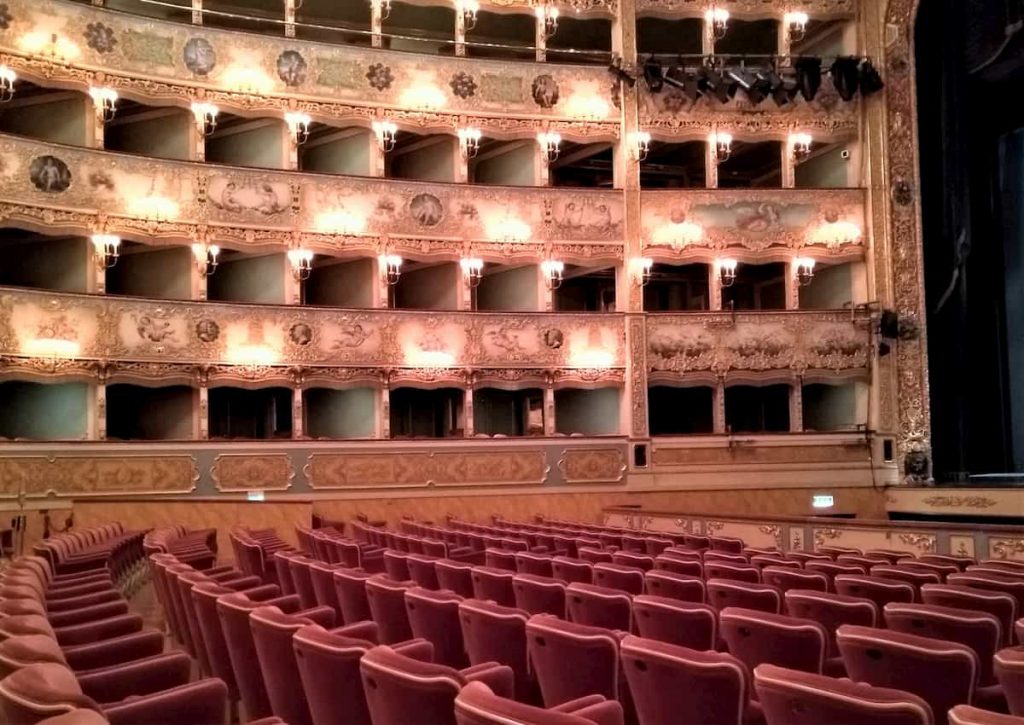 The Opera house in Venice is called Teatro La Fenice, The Phoenix. It was first built in 1792 as a replacement for the burnt down San Benedetto Theatre. The Phoenix, the mythical bird that raises from the aches, is a perfect name as it burnt down to the ground two more times, in 1836, reopened in 1837, and most recently in 1996. It was reopened in 2003.

Well, theaters that burn maybe sound like a rare events, but in the 18th century, there was no electricity. And as the theater-stage somehow had to be illuminated anyway, they used flammables such as candles and oil-lamps. These were put in rows at the front of the stage. Reflectors mirrored the light towards the stage and they could be closed to create darkness without blowing out the candle. This line of light was called the footlights.

The border lights illuminated the stage from above and the striplights from the sides. Young boys had the job to regulate the lights, and to clean up the candle wax, that tended to drip, run and create smoke.

The decor was in fabric or even in papier-mâché, and anyone who has seen a theater backstage during a performance knows how much running, moving, shouting, and carrying it involves. A less fire-safe surrounding is difficult to imagine. And theaters burned to the ground in every corner of Europe. It is a small miracle that we still have a few of the old ones still operational to this day. 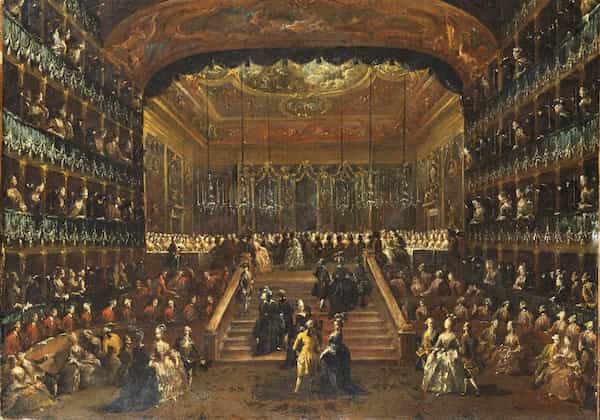 In the 18th century, Venice was a sanctuary for anyone with money who searched for entertainment. There were taverns, bars, and classy restaurants… And although the festival was abandoned there were plenty of possibilities to meet others incognito, and play games together. Prostitution was everywhere. Unfortunately, the theatre in those days was a perfect place to make acquaintances, i.e. pick up girls.

In Venice, at the beginning of 1700, there were about 20 theaters. The City with its wealth and extraordinary beauty attracted people with money. And, while in many other European metropoles, the theatres were closely connected to the court, in Venice they were much more in the hands of the open market.

At the end of 1700, seven theaters remained. Two for drama, and five (!) for opera. And the biggest and most luxurious of them was Teatro San Benedetto. It burnt down in 1774. Before the fire, the theatre was owned by a group of financially solid box holders. The ground on which it stood, on the other hand, belonged to the Venier family.

After the fire, it was rebuilt and reopened in the same year, 1774. But constant quarreling between the box-holders consortium and the Venier family resulted in a court order saying that the ownership should return to the Veniers.

The ultra-rich box holders were frustrated. So they decided to make an effort to build a bigger, more luxurious, and better theatre close by. And so the Teatro La Fenice was built. More as a provocation than anything else.

In 1792 she was ready. It was a marvelous building and soon it became the number one opera house in Venice, as well as one of the most important in the world. Here’s a short list of all the world premiers that have happened in Gran Teatro La Fenice. The Gran – Big, the owners added to the name to ultimately show the Veniers who had the upper hand. 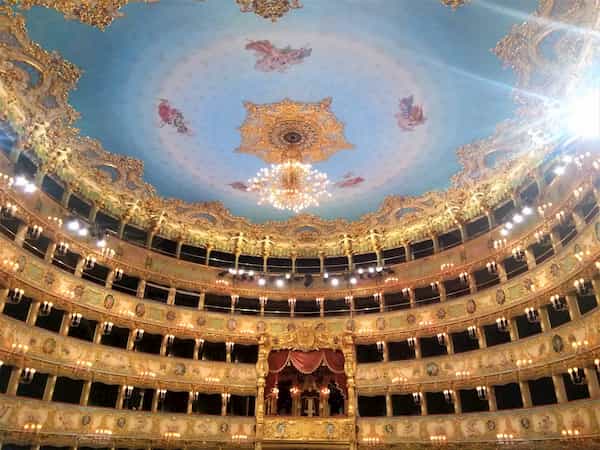 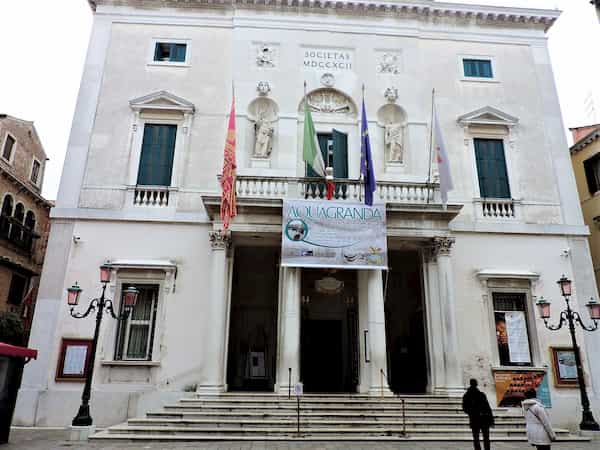 Teatro La Fenice as the Premier Opera house in Venice

The luxury and extravagance were evident from the beginning. But when you approach La Fenice today, already from the exterior you notice how small it is. It’s actually bigger inside than it seems from the outside but compared to other famous Opera houses… La Scala of Milan, Metropolitan in New York, Wiener Stadts Oper, and the various theatres in Berlin, La Fenice is tiny… Minute. It looks like one of the smaller Venetian palaces, nothing more.

Inside, the foajè is also very small. It’s luxurious but very small. The colors are sparkling, gold, peach, coral, and white. It’s a very light hue for being an opera house.

Take the stairs to the first floor, and if you enter the theater horse-shoe, you find yourself in the stalls. If you instead of going forward into the theater, you turn the other way, you will enter Le Sale Apollinee, the Apollonian rooms. In the far end, there’s a Hall for concerts, and that is one of the most beautiful concert halls and with the best acoustics in the world. If you get a chance to listen to something there, an afternoon concert, a recital, musica da camera, and if you can get a ticket, then go. It’s an experience out of the ordinary… Hoping that the musicians are out of the ordinary too, that is.

Going back and entering the theater, it’s obvious how new and fresh everything is. And, of course, it’s newly furbished. The last time Teatro La Fenice burned was 1996.

That year, there was ongoing restoration, as the stage and the parts above it needed repairs and a total overhaul. For the few months that the work should take, the company was rehearsing elsewhere and touring in other parts of Europe. The workflow was timed carefully and there was a chain of activities that had to be followed in a strict order. One company had to complete their doing before the next one started, and so on. For all this to work, there were special clauses in the contracts with the building firms. If someone wasn’t ready in time, the fines were astronomical.

A small electricity company, with two employees on-site, was already behind, and when the work continued to progress slowly, they decided to start a small fire. Nothing big, just enough so that they could blame the delay on the fire, and not having to pay any penalty. However, the small fire didn’t stay small for long. The whole place was full of flammables, paint, cleaners, ethanol, plastics, and wood, etc. because of the restoration. In just a few minutes the whole building was on fire.

Another crucial fact was that the canal behind the theater was drained. The firefighters in Venice, normally connect their hoses to the canal, and from there they pump up the water. But this time, the nearest canal with water in it, was Canal Grande. And that was far away, and it took time to connect and start pumping. Time that they didn’t have.

They even tried water bombing with a helicopter. But, very soon they simply had to let go of the theater and try to save the surrounding buildings. It was a sad moment for Venice and people were crying openly in the streets.

After the fire, the money started pouring in, and the city immediately planned for reconstruction. For that, they used the motto from the reconstruction of the San Mark’s Bell Tower that crashed in 1902… Com’era. Dov’era, As it was, where it was. This is to say that the new theater should be exactly like the old one.

The contract for the reconstruction was won by Holzmann-Romagnoli and the famous architect Aldo Rossi. But they had hardly even started carrying out the waste with wheelbarrows before the work was stopped. Legal issues and a long line of lawsuits put work on ice. Mr Rossi unfortunately passed away in 1998.

It wasn’t until 2001 that the Major at the time Paolo Costa, again called for tender. This time Sacaim, another construction company wins. The original project by Aldo Rossi remains, and the new theatre is built around his ideas. Paolo Coast promised to conclude the construction of the new opera house by 2003, something that made most people laughed loudly. Knowing the history of Venice, the special issues she has with building-techniques and knowing something about the last 5 years… That was absolutely ridiculous.

All rise for the Major, Paolo Costa

Well, he did it, even if it was a close shot. In late December 2003, there was a week… Actually two weeks of concerts for the inauguration of the new theatre. La Fenice wasn’t finished, but it was ready enough for the opening feast. And it was emotional. At least for the Venetians, it was much more of greeting a very old friend whom you thought was dead, than just enjoying good music.

Although the motto was As it was, where it was, many didn’t recognize the new La Fenice. 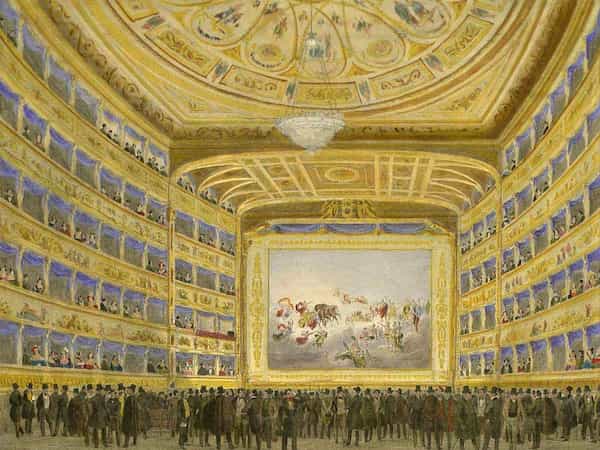 Aldo Rossi had looked further back. He hadn’t built it like it was in late 1900. He had rebuilt the Gran Teatro La Fenice as it was in the beginning. The way the first architect Gian Antonio Selva had built it. The red, bordeaux, and dark was replaced by light blue, peach, gold, and lemon. And he restored the old main entrance… From the canal.

In the old days, all the important people came to the opera from the canal, by boat… Gondol. And that is another reason why the front entrance, the one from the street, is so small and incìsignificant… Only poor people should go there.

Today you can’t enter from the canal though. That door is only for loading and unloading.

He also rearranged the chairs so that the theater now has around 1000 seats. Before the fire, it had 860. Still a small opera house.

So, it’s really a unique theater just like so many other buildings in Venice. And the uniqueness, is right there, in the new and fresh. This is something as rare as an old opera house as it could have been when it was new. The Metropolitan, the Covent Garden, and the Wiener Staatsoper, they were all like this once. Well, not like La Fenice, because no theatre is like La Fenice. But they were new. Once upon a time, in the 17th century… In the 18th or 19th century, the opera houses were new. And the operas they performed were new. It was the ultimate creativity, right there in front of the people watching it.

And now, the practical information

The guided visit is with an audio guide.

If you want to see an opera, here’s a link to La Fenice.

And here is an inside tip…

If there’s a rehearsal on stage you get to see it with the guided visit. There’s no way you can know beforehand if they are rehearsing unless you know somebody inside the company. But if you’re walking by, step in and ask. Because it’s a wonderful way to see the theater, listen to some beautiful music, and still have money over for a Spritz.