The Doge's Palace through history 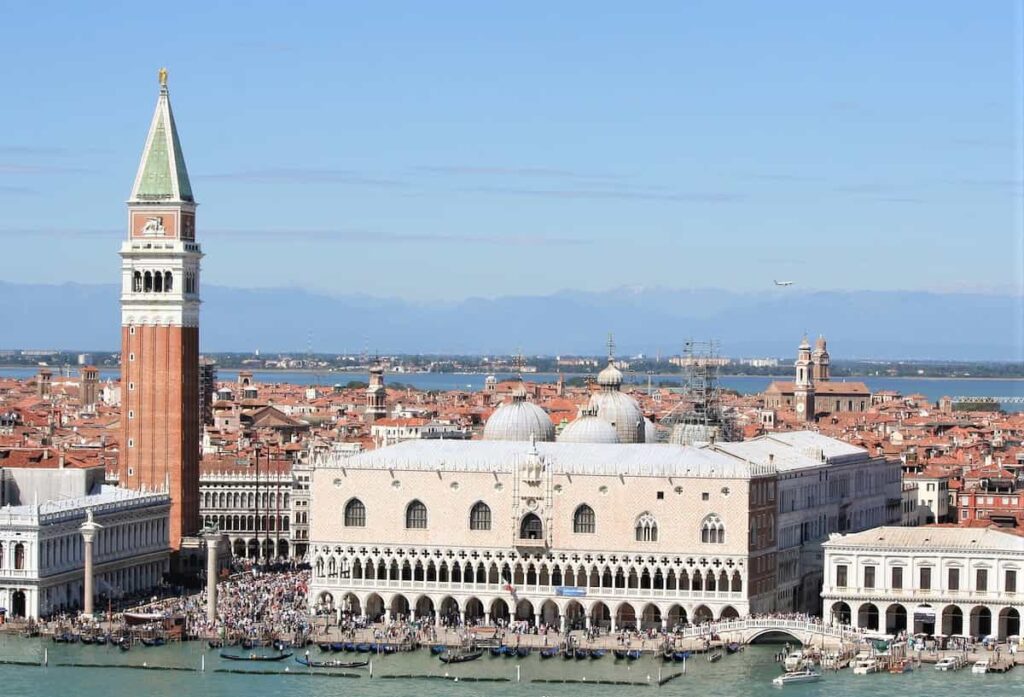 The Doge’s Palace is one of three major tourist attractions in Venice. The other ones being the Belltower, and the Basilica. Together they form an image of the overwhelming power the Venetian Republic once wielded over the eastern Mediterranean. From around 1000 until the discovery of America and the sea route to India, Venice was politically, economically and military what best could be described as a superpower of the time.

And all that wealth and power was built into the most prestigious Palace of the Serenissima… The Doge’s Palace. It was there, in the luxurious halls and rooms, that all the important decisions about strategies, and politics were made. It was the heart of the republic.

So, what exactly was the Doge’s Palace?

Venice was born in a time when two (or even three) other superpowers were in conflict, These were the Byzantines and the Francs, whose leader Charles the Great, in the year 800 was even crowned Roman Emperor by Pope Leone III. The third superpower would be the Longobards. In this context, the leaders of Venice were appointed by Constantinople with titles like Esarco, Magister Militum, and Dux, which meant a sort of Viceroy. Dux is Doge in Venice, and the Doge was appointed by the Byzantines in the beginning, not elected.

In the 7th century, the Doge’s Palace was the residence of the Doge, nothing more. The very first Palace was consequently in Heraclia (Eraclea), where the first Doge lived. But with time the Francs got stronger at the Byzantine’s cost. In late 700 all that was left of the Glorious Roman Empire in the north of Italy was a small settlement inside the muddy waters of the lagoon.

The Doge still needed a place to live. When Heraclia and Malamocco on the coast and all the other Byzantine Garrisons inland had been sacked, all that was left was Venice, guarded by the impossible position inside the lagoon.  The Byzantines at all costs wanted to keep a foothold in Veneto. So, the new Dux’ Palace had to be right there… in the strange, floating village, built on wood poles and istrian stone.

The first Palace was raised some time around 815, but we do not know what it looked like. And we don’t have maps of Venice from that time. What we do know is that the area where the Palace lies today and behind it consisted of an agglomeration of buildings of different shapes and uses, protected and surrounded by a substantial wall reinforced at the corners by massive towers and isolated by a canal. 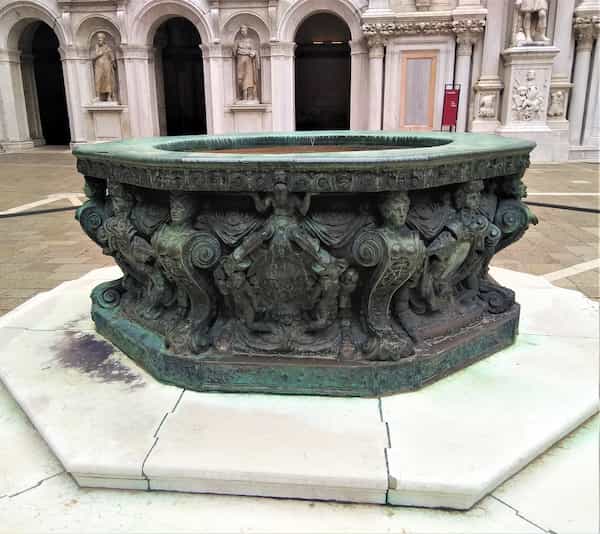 Remains of the fortifications and corner towers still survive today.

In the numerous building structures that crowded the area, there were public offices, the courthouse and prisons, the Doge’s apartment, stables, armories, and more.

The Palace was practically surrounded by water with docks on the western side where the Piazzetta is today. The front of the Palace was directly on the lagoon. It was probably more of a fortress, and obviously nothing like the Venetian Gothic style of the present Palace.

The long seafront which today is full of tourists all the way over to Giardini didn’t exist at the time. Between the Doge’s Palace and Castello there was water.

In the 10th century, the first Doge’s Palace was partially destroyed by a fire, rebuilt, and then partially destroyed again in 1105. The following reconstruction was commissioned by Doge Sebastiano Ziani (1172-1178). He radically restructured the entire area of ​​Saint Mark’s Square. He raised the two columns of Saint Mark and Saint Theodor. He built two new administrative buildings: one towards the Square, to house the functions related to justice and one towards the Basin, for government functions. And he was the one who created the Saint Mark’s Square more or less as we see it today, with the part that lies west of the Palace, where the Piazzetta is today, drained and made into a Square.

The old closed and fortified castle was replaced by a building that was much more open to the city, to adhere to the new needs of an expanding political, economic and social structure.

Only a few traces of this phase of construction have survived, substantially identifiable in a remnant of the Istrian base and in herringbone terracotta floors.

The 1300 palace and the much bigger Senate

A new extension was necessary at the end of the 13th century. In 1297. Political changes – the so-called “Serrata del Maggior Consiglio” – resulted in a considerable increase in the number of people entitled to participate in the legislative assembly, from four hundred to twelve hundred.

The Maggior Consiglio, the Venice Parliament, started out as a small group of counselors assisting the Doge in his work. As Venice’s dominance grew, more people wanted to ensure that the government of the republic was fair and just. The Doge’s executive powers became more restricted, the election system more complicated, and subsequently, the number of the members of the Maggior Consiglio grew. This body’s main purpose became to elect a Doge and to control him. It continued growing and in mid-1500 it consisted of more than 2500 senators, voting in an immensely complicated voting system..

The works that finally brought the Doge’s Palace into today’s familiar appearance began around 1340 under the Doge Bartolomeo Gradenigo (1339 – 1343). It involved the wing facing the pier. Some of the architects involved are also documented. In 1361, for example, a certain Filippo Calendar Tajapietra and a Pietro Basejo magister prothus are named. In 1365, the Paduan painter Guariento was called upon to decorate the eastern wall of the Hall of the Great Council with a large fresco, while the execution of the window was the work of the brothers Pierpaolo, and Jacobello delle Masegne. The Maggior Consiglio met here for the first time in 1419.

In 1424, under Doge Francesco Foscari (1423 – 1457), it was decided to continue this renovation also in the wing towards the square, the one destined for the “Palace of Justice”. The new building is configured as a continuation of the “Government Palace”: on the ground floor there is a portico on the outside and open loggias on the first floor, also on the side facing the courtyard; on the same level as the Sala del Maggior Consiglio there is a vast hall, known as the Library (later the Scrutinio).

The large windows and the pinnacle crowning take up the same decorative motifs that characterize the facade on the pier. The facade on the square was completed with the construction of the Porta della Carta (1438 – 1442), by Giovanni and Bartolomeo Bon. Starting from the Porta della Carta, the construction works of the Foscari Entrance hall began, which lasted for a few years and were completed under the Doge Giovanni Mocenigo (1478 – 1485).

In 1483 another large fire broke out in the eastern side of the building overlooking Rio del Palazzo, which houses the Doge’s Apartment. The important work of restoration was entrusted Antonio Rizzo. He introduced the Renaissance style into the Doge’s Palace. The whole eastern wing was completely rebuilt, and the ducal apartments were completed by 1510. In the meantime, Antonio Rizzo was replaced by Pietro Lombardo, who then was replaced by  Antonio Abbondi  in 1515. It lasted until 1559 before the works were finished.

From this period we have the two large statues by Sansovino, Mars and Neptune, on the Scala dei Giganti.

In 1574 yet another fire destroyed parts of this wing, damaging in particular the Doge’s Apartments, fortunately without affecting the supporting structures. The wooden parts and the decorative apparatus were immediately rearranged.

Fire was a common and deadly enemy in the middle ages, and in 1577 it erupted again. This time  in the southern wing destroying parts of the Sala dello Scrutinio and the Sala del Maggior Consiglio. Tragically many timeless art-works by artists such as Gentile da Fabriano, Pisanello, Alvise Vivarini, Carpaccio, Bellini, Pordenone, and Tiziano were lost.. The building structures were restored quickly, and they retain their original appearance.

The new prison and the Bridge of Sighs

Until then, the Doge’s Palace had housed, in addition to the Doge’s Apartment, the Government Seat, and the Courts – also the prisons (on the ground floor, on the eastern side, to the right and left of the Porta del Frumento, today’s public entrance). Only in the second half of the 16th century did Antonio da Ponte order the construction of the New Prisons on the eastern side of Rio del Palazzo. To get there from the Palace a bridge was required and the head architect, Antonio Contin, drew up Bridge of Sighs around 1600 and connected it to the palace. The name obviously indicates the prisoners sighs, when they were lead over from the free world to the terrible dungeons, and maybe death. From these chambers, Casanova did a remarkable escape in 1756

The transfer of the prisons freed up spaces on the ground floor of the Doge’s Palace. It also allowed for the renovation of the courtyard area at the beginning of the 17th century.

The Doge’s Palace after the Republic 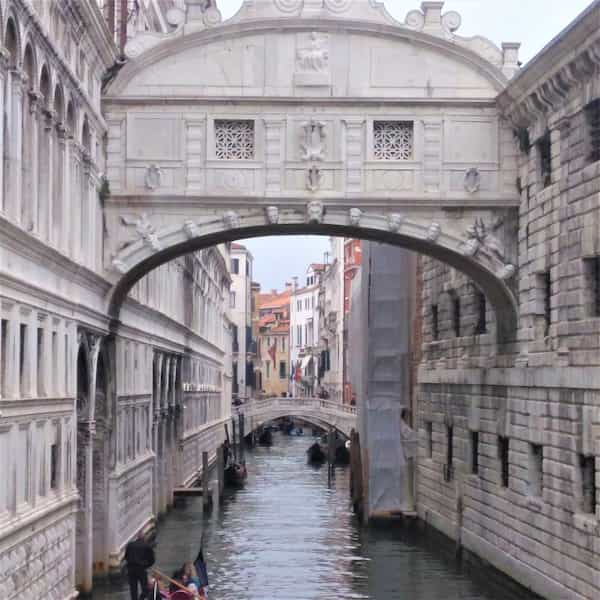 After the end of the Venetian Republic, the functions of the Doge’s Palace obviously changed. The former symbol and heart of political and administrative life of the Republic of Venice had no place after 1797, the year in which the Serenissima fell. French and Austrian domination followed, until the annexation to Italy in 1866.

In this period the building becomes the seat of various offices, as well as hosting the Library, the Nazionale Marciana, and other important cultural institutions of the city. for almost a century.

At the end of the nineteenth century, the building showed evident signs of decay: the Italian government then decreed huge funding to provide for a radical restoration. On that occasion, many capitals of the fourteenth-century portico were removed and replaced, These can be seen today at the Opera Museum (Which has nothing to do with opera. It’s a museum of the enterprise and constructions.).

All the institutions were also transferred, with the exception of the State Office for the Protection of Monuments, which still resides there today, as the Superintendence for Environmental and Architectural Heritage of Venice and the Lagoon. In December 1923, the State, who is the owner of the building, entrusted the management of the building to the Municipality of Venice. In 1996 the Doge’s Palace opened as a public museum and is today a part of the Civic Museums of Venice.

The Palace is temporarily closed because of the Pandemic.

There are two ways to get in:

The secret Itinerary Tour is a guided tour where you see things you normally don’t… Like the cell of Casanova. It’s a beautiful way to get under the skin of the Palace and you’ll have a guide to ask all your questions to. If you only are interested in the Palace and not the other museums, then I would definitely recommend the tour. As would I if the lines to get in are long, and the sun is hot.

There are reductions for over 65, under 14 (children under 6 are free), and students under 25. The Rolling Venice card for under 29 also entitles to reductions.

If you want the other three museums, you can buy the 25-euro ticket, see all of them once, including the Doge’s Palace. If you already have that ticket, or if you have the entrance ticket to the Clock Tower on the northern side of the Square, you pay only 15 euro for the Secret Itinerary Tour.

Venezia Unica City Pass also has the possibility to plan your visit and get a discount. In that case you need a bit of planning, and you need to know where you want t go before hand.

Top of the page 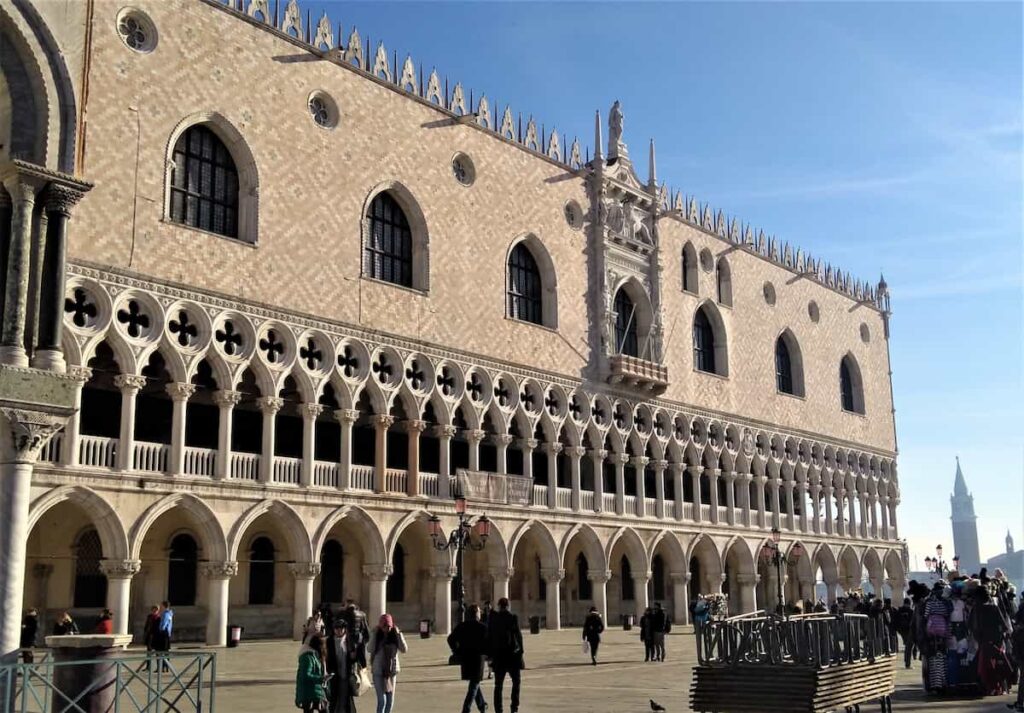