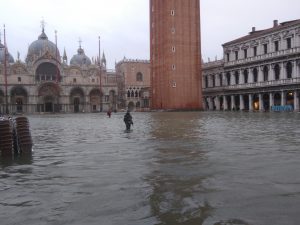 Is she doomed to submerge into the Adriatic sea?

The simple answer is, Yes she is. But it’s a very slow process. On average, the soil on which she stands is 1,2 millimeters lower each year. That’s not much, but then again, every centimeter lower means higher tide. And the famous Venice high water is a huge problem already at the levels of today.

This is called subsidence. And it’s more or less the same as in other comparable cities.

Venice stands on water and therefore the groundwater level is an important issue.

After the 2nd world war, came the industrial boom.

The Harbor on the mainland, Porto Marghera, with its huge industrial area, expanded and new factories were constructed on a daily basis. For the construction and even more so for the production they needed water. And the water was taken from the soil… the groundwater. This lowered the levels and all of the surrounding lands paid the consequences. Venice started sinking more and when the subsidence reached ten times the one we have today, someone had to do something about it. In 1969 it was 14millimeters per year.

So new regulations were instituted and violations were prosecuted. Then new water pipelines were constructed, and Venice actually re-bounced. In 1975 the city rose almost 20 millimeters. After that, the subsidence has stabilized. Although recent studies conducted by INGV suggest that natural subsidence could be as much as three times bigger than previously thought.

The Eustatism, the more dangerous threat…

The eustatism, the rising sea level. Globally this figure used to be 3,2 millimeters per year (NOAA), but according to the IPCC report of the 24th of September 2019, it’s now 4 mm/ year. In the Adriatic Sea, it’s a little less but when you think of it, it’s all really just one big bowl of water. If levels rise in the Atlantic and the Pacific it’s just a matter of time before the water flows into the Mediterranean. IPCC (Intergovernmental Panel on Climate Change) estimates a rise of sea level globally of 1,1 meters by 2100, still according to the report 2019.09.24.

Well, at a 1,1 meter higher sea level…. it doesn’t really matter if Venice is sinking or not. It will be gone anyway.

In 1966 we had the highest high tide in the history of the city, the so-called Aqua Granda. The sea level reached 196 centimeters over the main sea level, wiped out most of the services, and caused immeasurable material damage to all of the territory. A new awareness of the vulnerability of the city started to grow among politicians locally and nationally. Something had to be done to protect this unique place with its fantastic palaces and millennial history for future generations. Because in the later years the high water is becoming more frequent. In November 2019, in one week we had 4 of the 20 highest tides of all time with the peak on the 12th… 187cm. Is Venice sinking? It certainly looked like that the morning after.

And so a solution is at hand.

After 30 years of various projects, drafts, and quarrels finally in 2003, the MOSE was initiated. The name stands for Modulo Sperimentale Elettromeccanico, Experimental Electromechanical Module. It’s a huge project where enormous floodgates block the passage at the three inlets to the lagoon. In normal circumstances, they lie flat to the bottom but when the high tide sets in, air is pumped into the gates and they rise up and close the straits. At least that’s the idea.

The reality is that after 15 years it’s not even completed. And now we enter a dark tunnel of corruption and politicians and industrialists holding hands… The money is floating out of the project like water through a colander.

In February 2013 the first arrest took place, followed by another 50 or so in the year and a half that followed. Among them, many high-ranked politicians and public administrators. The Venice Major Giorgio Orsoni had to resign in 2014 all because of this.

Since then the progress is almost at a standstill. Today the completion is estimated at 94% and the building site is in the hands of ANAC, the National Anti-corruption Authority. But the lack of financing not only stops the progress but since it’s a very technically advanced project and we’re talking about the bottom of a soft, muddy and very rich environment, we actually go backward. Now already before it’s completed it needs maintenance for tens of millions. For example; all the mechanics lying there on the muddy bottom is full of sludge, clams, and algae to an amount where operating it becomes difficult or impossible. To clean one of the sluice ports the estimated cost would be 1,5 million euro while buying a new one costs 1 million. There’s a sustainable society for you…

It’s funny to read the following phrase on the official site of the MOSE project:

The Mose can protect Venice and the lagoon from tides up to 3 meters high and from a  rise in sea level up to 60 centimeters in the next 100 years.

Still referring to the latest report from the IPCC of the 24th of September, The whole project could be outdated in fifty years.

Venice will face many challenges in the decades to come. Some of them we can overcome with a bit of hard work while others are more difficult. Of all the threats to the existence of La Serenissima, the rising sea level is the greatest. No doubt about it.

But if the oceans rise a meter or two, maybe we will all have bigger problems to face than to worry about if Venice is sinking…

Early in the morning Wednesday, January the 30th the last of the 78 sluice ports in the MOSE project was installed. It was number 11 of the Lido south-line consisting of 20 ports, each one 20 meters wide, 27 meters high, and 4 meters thick. Still, it’s not operational though. A lot of the electronics and control mechanisms are not yet in place. But the intention is to start testing the single ports of the other lines, 4 or 5 at a time already in February. And maybe, just maybe have the whole system operative in late 2021.

We’ll see about that…

On the 17th and 18th of September the whole line of the most northern gates, called San Nicolò, were raised. Actually, half the line because they rise them in groups of 10. It’s still a demonstration of functionality, though. Now that line goes into a period of maintenance. In October, the same procedure will be carried out on the Chioggia-line, the most southern, and after that the central line.

The whole project will be completed, tested, and ready to run by the end of December 2021.

On the 10th of July 2020 the whole barrier of gates, 78 of them, were closed. Only for a short period and on a calm day with beautiful weather. But still, it worked.

On-site there were many representatives from the government as well as local politicians, Prime Minister  Giuseppe Conte, Interior Minister Luciana Lamorgese, and Minister for infrastructure Paola De Micheli.

Commissioner Elisabetta Spitz, responsible for the conclusion of the project said in an interview that it would take another 18 months to calibrate, test, and render MOSE fully operational. But the Prime Minister expressed a wish to have it ready in autumn in case of extreme high waters, like the one we had in November 2019.

A handful of protesters in boats had met up to try and reach the gates to stop the testing, but they were unsuccessful in doing so.

Well, she’s actually up and running. On October the 3rd, all the 78 gates were raised and instead of 130 centimeters, we had around 70. Venice was dry and no water came through. It was the real deal.

Yes, it works. When writing this we are in late November, and the critical high water season is upon us. But no water has come through, and no part of Venice has been drenched more than just marginally. The MOSE system is working… At least so far. Every now and then I receive a message on my phone declaring that the winds are strong and the maximum high tide will be 125, or 130, or something like that. Actually following the exact same warning systems that we have come to appreciate so much over the years.

Then at the bottom of the message, there’s the assuring sentence: Possible activation of MOSE. And later I get a message saying: MOSE is active in all three inlets.

… And life goes on without rubber boots, without the sound of overloaded drainage pumps, and without people swimming on Saint Mark’s. It’s not a miracle, but it’s darn close…