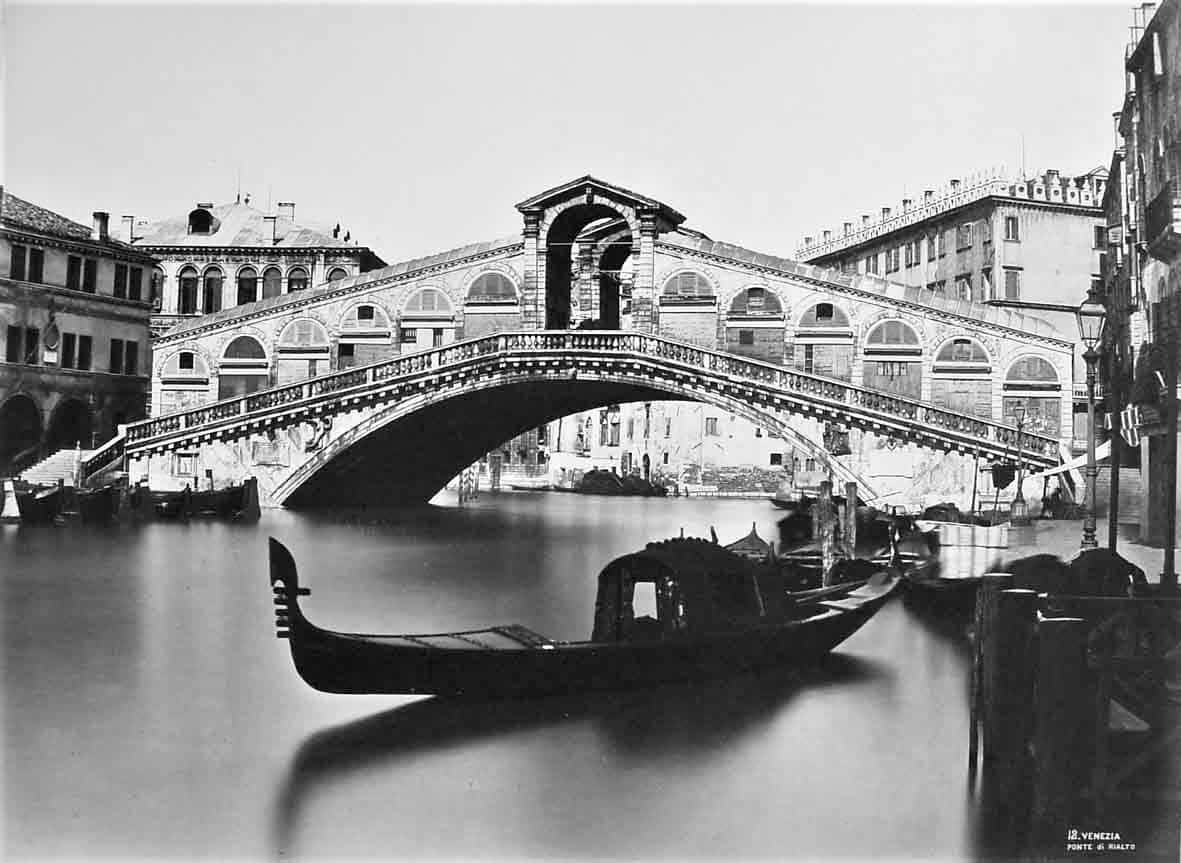 the great architect who constructed the Rialto Bridge lost his wife and his unborn child when working on the project.

Many engineers and builders proposed their ideas to the City Council, but da Ponte offered a different solution. He was going to build a bridge with only one arc. No obstacle to block the passage on the canal. One single arc from one side to the other and the leading men of the City were all very impressed.

But soon after he got the contract, he started to think that maybe, just maybe he had bit off more than he could tew. Building that a long arc is difficult… But building it in Venice, where the foundation is mud and doesn’t hold, seemed a fool’s errand  The ground doesn’t resist vertically, but horizontally it’s even worse. And that kind of an enterprise has a lot of vertical force. The single arc just tends to push the supports on each side away from the center, and bring the whole structure straight down.

Many nights he sat in front of a white paper and candlelight to try to figure out how building his Rialto Bridge could be done, while his wife slept beside him having uneasy dreams. He had married a much younger bride, and she was expecting their first child together. Even though he was a man of considerable age, his future offspring filled him with joy and gratitude.

And weeks passed, months even, with constantly failing experiments. Small models that crumbled, bigger wooden structures that crumbled, and in his mind the seed of the most deadly enemy to a creative soul started to grow… Doubt.

–  It’s the work of Satan, said his father in law one evening after dinner. Only the dark forces can bring down that much bad luck. You should talk to a priest.

Antonio, who wasn’t much of a religious man, figured that maybe that’s what he had to do.

So, the next day he ventured over to the San Fantin church, but before he could enter he was approached by a tall man in a dark robe…

–  Maestro da Ponte, said the man with a voice that sent a chill down the spine of the poor architect.

The man hesitated for a second. Then he smiled and sighed.

–  It’s a difficult task to bind together, he said. Much easier to tear apart. Let me offer you… something…

He took a step closer and whispered.

–  I can help you with your bridge-building. I can make it stand up, from now, until the end of time… Forever. I can give you a Rialto Bridge so wonderful and solid that your name will be equal to that of the Republic, forever.

And there on the Campo San Fantin, Antonio da Ponte signed the contract that would save the Rialto Bridge.

But we all know that nothing is free in this world. The Devil wanted the soul of whoever crossed it first. On the day of the connection between the two parts, the day that Venice finally would be a complete city, the first creature who walked over the bridge from one side to the other, would be handed over to the dark forces. And his soul would be lost forever.

The work on the Rialto Bridge proceeded with incredible speed.

No more crumbling and no more misfortune. But the closer they came to completion, the more Antonio feared the outcome of his pact. Many evenings he strolled around in Venice trying to find a solution until one day he found himself in Campo dei Pozzi in Castello. Three hens ran out from a portal and crossed his way right in front of him, cackling loudly. And suddenly he knew what to do.

From there on he was happy and confident. He worked hastily and after only three months they were almost ready. The canal was drained and it was just a question of a few feet of stone before the arc would be completed.

On that last day, Antonio asked one of the helpers to run as fast as he could to his house to get a box with a rooster. And with a smile, he went back to assisting the paviours.

But evil forces are never far away.

At least in those days, the Devil always lurked in the shadows. And seeing the smile upon the face of the architect, the boy running away to fetch a box with a rooster, he immediately understood the plan of Antonio’s.

So, the tall shadow hasted along the dark Calli, over the bridges, until he came to the residence of the da Ponte family. There he waited.

At the bridge, the last stones were put in place and all of Venice stood in awe as the two sides of the floating city finally were becoming one, with a bridge of stone connecting la Serenissima.

When people started to push to be allowed to cross, Antonio stopped everybody.

–  It’s not safe. Before we let anybody up on the bridge we have to try out the resistance.

And he called upon the boy with the box.

But in the meantime, the devil had knocked hard on the da Ponte’s door, shouting, and screaming.

The poor pregnant woman came out.

–  Madame… Something terrible has happened! There’s been an accident down at the bridge. Your husband…. He’s…

He shook her and looked in her eyes with terror. 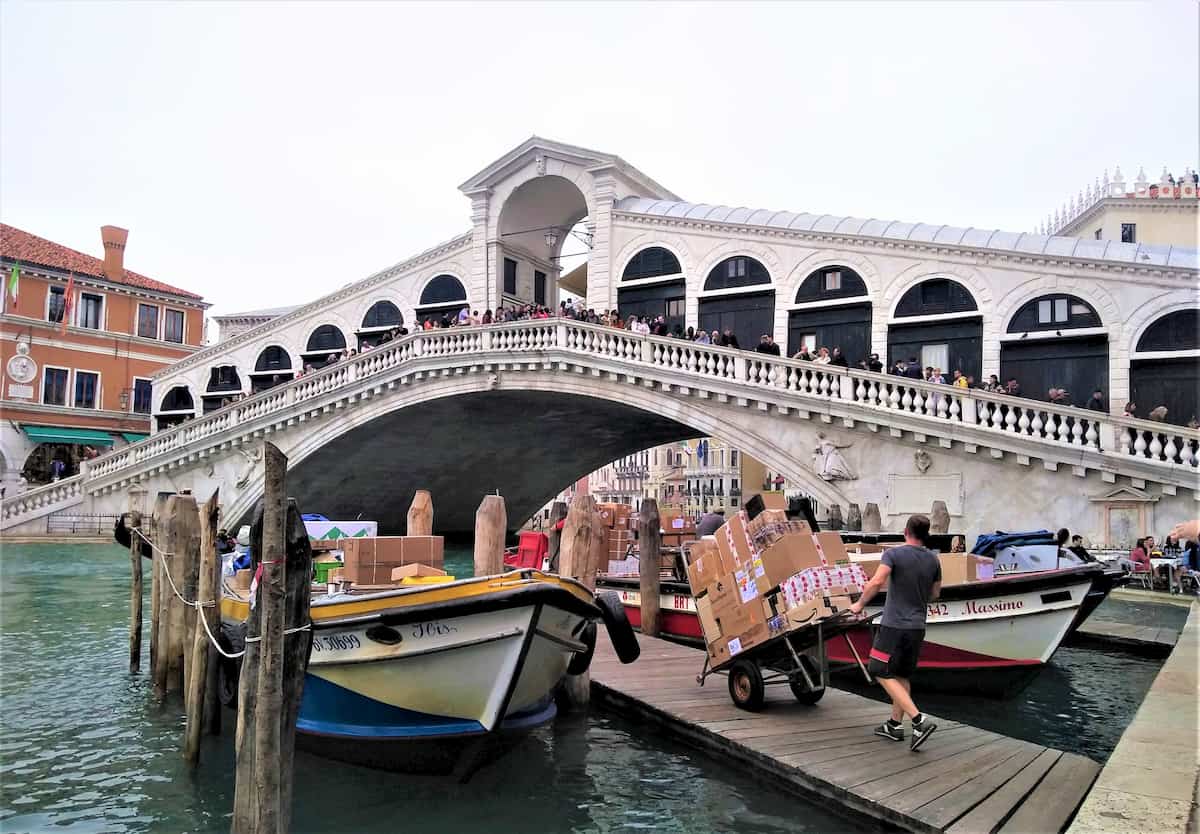 And the poor lady dropped everything in the doorway as she stood, and started running towards the bridge  Left and right through the alleys of Venice until she reached the construction site.

When she saw the crowd, she pushed her way through the men and women who were gathered there, thinking the crowd had formed because of the accident.

And as Antonio, took out the rooster, and put him down on the Rialto side, to have it walk over the bridge, he saw in terror his wife on the far side.

But the crowd was cheering, and the people were singing and shouting with joy and happiness. Finally, Venice would have a stone-bridge over Canal Grande.

–  Stop! screamed Antonio as he watched his beloved wife free herself from the hordes at Pescaria San Bartolomeo and run up the far side of the bridge.

With agile feet, she reached the top of the Rialto Bridge and when she looked down at the other side, she saw her husband healthy as ever hurrying towards her. She stopped, and a shadow, merely noticeable, came up from the opening towards the northern part of the Canal and embraced her. One second the glance of her love was reflected in the tear-filled eyes of Antonio, and then she was gone. Never to be seen again.

Even today, late nights in December, you can sometimes hear a soft weeping from the shades under or near the bridge.