The Feast of the Redentore is a traditional main event in Venice. Fireworks, Mass, eating and drinking. This year it takes place the 20th and the 21st of July, the third Sunday of the month. A happy celebration. The origin of it isn’t all that happy though.

The plague, the deadliest disease mankind has experienced. An eerie terror that for hundreds of years knocked out most of Europe’s population and left the few survivors in misery and fear. It also meant a unique opportunity for all kinds of doomsday theories to gain a foothold. Perhaps the most obvious was the Catholic Church’s pursuit of any dissent… The Inquisition.

The first time the disease struck was in the mid-14th century. In 1346, the disease reached Constantinople and Crimea and then via land further north into the countries of Eastern Europe. In 1347 it came to Sicily and from there it spread northwards in Italy. It arrived in Venice with ships from Dalmatia in 1348. 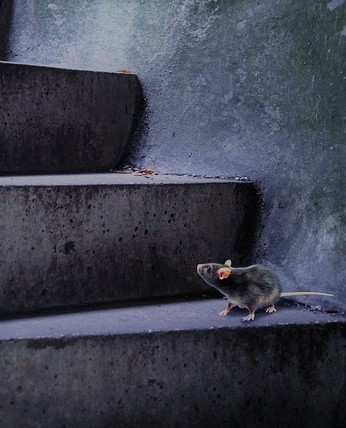 Doubts about the origins of the Plague

Some scientific theories, however, claim that the plague has existed in Europe ever since the Roman era, but that it could not be defined. In the Middle Ages, large cities with a lot of people had grown up throughout the continent and this was a prerequisite for the spread of the disease. But perhaps the plague existed already before that, though mortality was much smaller.

Throughout Europe, the disease changed the living conditions of millions of people. Not only because people died, but also because those who survived had to live on in a far more uncertain world. In Venice, drastic changes were made in shipping. A system of quarantine for arriving ships was introduced and in 1423 a state-run hospital was created to cope with the sick people, the first in the world. Despite all these severe measures, the plague struck 69 times in the following centuries. Every time with consequences that can hardly be understood today. 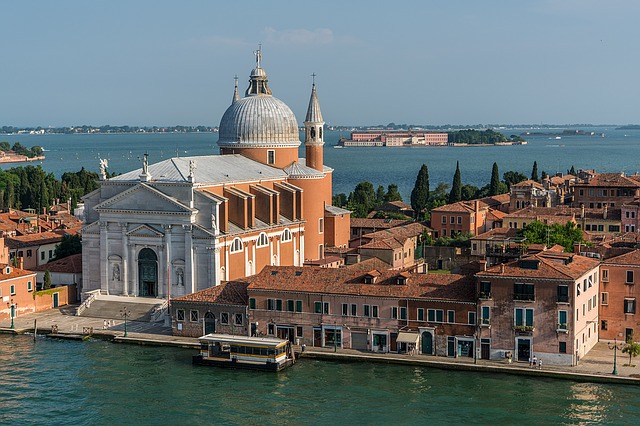 The church of the Redeemer – Redentore

In 1575 there was yet another wave of pestilence. From July 1, 1575, until February 28, 1577, one-third of the city’s 180.000 inhabitants died. After summer 1576, when the disease appeared unstoppable, the Senate decided to pray for divine help. They decided to build a church in the honor of the Redeemer – Il Redentore, the one who lifts all our sins.  In the autumn, when the natural cold limited the movement of the rats as well as the proliferation of the fleas, the Venetians could see a significant slowdown in the spreading of the disease. And in spring it was over.

The Senate kept its promise and the same year the construction of one of the most impressive and lavish domes in Venice started, following Antonio Palladio‘s drawings; Basilica del Redentore. Already in the summer of 1577, a bridge was built over the Canale della Giudecca with wooden boats lashed together. The Doge, Alvise Mocenigo, promised solemnly that every year throughout his life and every year during all the Doges who’d follow, a Mass would be held on the third Sunday of July, to celebrate the salvation of the city. 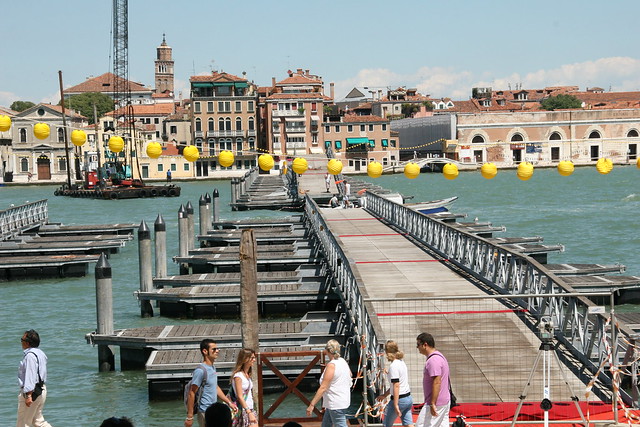 In 1592 the church was finished and since that day, La Festa del Redentore is one of the most important and most frequented of all of Venice’s festivals. It is also something as rare as a genuine Venetian feast. Many locals and even more tourists. You can attend Mass or just check out the fireworks.

So, this is what’s happening

First of all, it’s another Village Feast… Or really a boat Feast. The tradition is to experience the marvelous fireworks from a boat floating around on the Canale della Giudecca. The boats and ships are decorated with all kinds of artistic colored lights and balloons. On the boat, you eat the traditional dinner, pasta e fasioi (pasta and beans), bovoleti (snails).. (..srrgh!), sarde in saor (sardines), and anara col pien (stuffed duck).

Now, the best idea is to have your own boat and eat and drink together with friends on it. But most people coming to Venice don’t bring the boat if they have one. So instead you can book yourself on a small cruise – a leisure ship, have your dinner there and then see the fireworks from the parquet.

If that’s not your thing then almost all of the hotels, restaurants, and trattorias facing the canal, will offer dinner with fireworks. Even those not close to the canal will try to attract customers.

If not even that is on your list favorite location, you can stay out in the streets. At the Fondamenta facing the Giudecca island, there are outdoor kitchens serving the traditional treats as well as local wine. From there you have an excellent view of the Basilica del Redentore and the water. 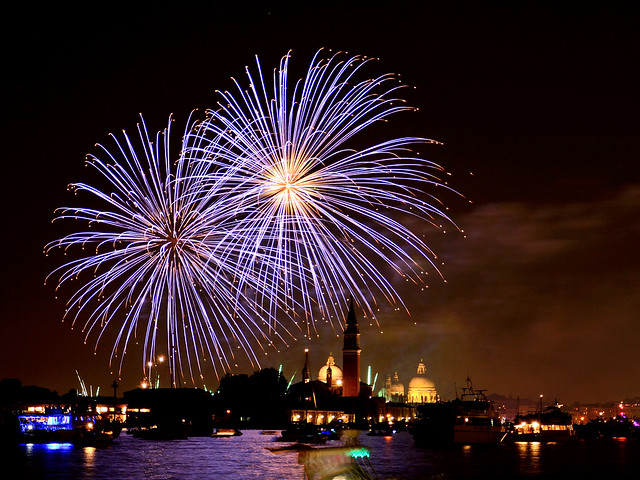 This is the program of the Redentore 2019

As usual, this year the Musica Venezia Cultural Association, Roberta Reeder Artistic Director, will present an evening of sacred music at the church of the Redentore. Performed by the Ensemble Musica Venezia,

Saturday the 20th of July

7.00 pm Opening of the votive bridge that connects the Zattere with the Chiesa del Redentore to the island of Giudecca

The Zattere side will be crowded. The Canel della Giudecca will also be crowded, with boats. The best spots are still on the other side though, at Giudecca. The bridge is closed from 10.30 pm until 00.30, so you have to be on time.

Sunday the 21st of July

At midnight at Serra dei Giardini between Via Garibaldi and Giardini, there’s a Silent Party with 250 headsets and 3 DJs.

But as always when it comes to Venice, the best tradition of all is just strolling around, eating something, drinking something and meeting people.