Tintoretto, his daughter and other tales.

Cannaregio is a scary place. The northwest part of Venice faces the northern lagoon. In winter the grey-ness and mist are particularly dense in the northern part. Some say it’s because foul things lurk in the shadows there. Ghosts, phantoms, and some things that are so terrible that not even the catholic church has the means or the resources to affront it.

The Ghost Brothel – Casino degli Spiriti on the outer coastline between Chiesa della Madonna dell’Orto and Sacca de la Misericordia has always been a place of rumors and stories. Some are confirmed and true, while others fade into the dusk and are more uncertain.

In 1500 the Palace was a known house of amusements. Artists, Nobles, and others with money to spend came to eat, drink, and gamble the night away. With them, there were servants, musicians, and prostitutes for entertainment. Painters like Tintoretto, Tiziano, and Giorgione were frequent guests, and Luzzo was, by that time, their equal in fame and talent.

Giorgione had a beautiful girlfriend named Cecilia and often when they came together, she was present. Her beauty and wit caught the attention of Luzzo, and it wasn’t long before he had fallen madly in love with her. But since she wasn’t free… Not that she was engaged or in any other way officially supposed to marry. But Giorgione was Luzzo’s dearest and closest friend. He couldn’t do anything about his love and desire, but to look at her from a distance.

One late night after a few too many drinks, Luzzo took a musket, went up to the top floor of the Palace, and shot himself.

Since that day his ghost can be heard on late nights in the area, sobbing, and lamenting.

In the 15th and 16th centuries, religious fanaticism wasn’t uncommon. Just think about the terrible Black Plague and it’s not difficult to understand that people had to turn to extreme measures for salvation.

But some practices and rites were different than others.

We do not know the details but from those years there are multiple testimonies about long processions. Monks in dark and hooded clothes, torches in hand, silently proceeding along the path towards the Ghost Brothel. Once there, the rites took place in the darkness of the night. Some of the practices are supposed to include torture and human sacrifice. 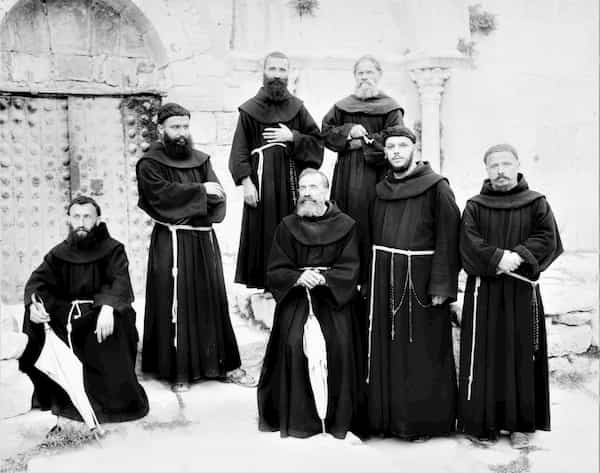 Even today many Venetians avoid the Ghost Brothel. It is said that there are rumors, strange lights, and presences out of this world. The soil of the beautiful garden of the Palace is supposed to be darker than in the rest of Venice. And no Cypress has ever grown there. They all die. For those of you who don’t know it, the cross on which Jesus was crucified was made of Cypress wood.

Again others say that the strange lights and sounds at night are just a remembrance from the days of the smugglers. To them, it was of vital importance that people stayed away, especially at night. Some of the movements were inevitable as they had to land the merchandise at night right there. And a bit of confusion and scary noises was just good business as it kept people and law enforcement away.

The smugglers were just as scary as the ghosts.

During the second world war smuggling was more and more becoming one of the very few activities that hadn’t become completely unprofitable. The war had effectively stopped every kind of trade as well as the little production industry that had started in the floating city. All that was left to do was buy or steal from elsewhere and bring it into Venice by night.

One very successful smuggler was Linda Cimetta. She was smart, cunning, persuasive, and extremely beautiful. She had a good net of handymen and collaborators and started to build a monopolized activity. She wasn’t from Venice but from Belluno, and maybe that increased the envy and jealousy of her competitors.

One day she disappeared. The police speculated in crime but the nature of her profession could also have forced her to just move away.

A few months after, some boys were swimming and playing in the waters in front of the Casino degli Spiriti. Suddenly they spotted a wooden trunk in the water and pulled to shore. Hoping to find who knows what kind of treasure inside, they earìgerly opened it.

Yes, you’ve guessed it. Inside was the body of poor Linda cut in pieces to fit inside the box.

Just one of many terrible stories from the horrors of the war… of all wars.

Tintoretto and his daughter

So, let’s get back to the 16th century and the gleeful life of the artists. Among the friends of Luzzo was also Tintoretto… Or Jacopo Robusti as his real name was. His father was a tintore, a dyer, and he got to be the little dyer: Tintoretto.

His house was right there in the neighborhood of the Ghost Brothel. He had 8 children, of which one, the oldest was born outside the marriage. Her name was Marietta she lived with her father and he treated her just like his other children. Tintoretto and his daughter were often seen walking together, and he taught her the art of painting. She was the only one of his children that inherited some of her father’s talent. At a younger age, she was requested as a portrait painter.

Tintoretto and his daughter also shared strong religious beliefs, and when the girl turned seven, she started attending the teachings at the nearby Madonna dell’Orto church to receive the first communion.

Walking to the church of Madonna dell’Orto

In those days it was tradition to let the children attend mass and receive the Eucharist for ten days in a row.

On the first day, walking the short distance to the church, a kind old lady saluted the Marietta with a smile:

She hesitated before she continued.

The old woman interrupted her.

Then she leaned closer to the little girl…

She smiled tenderly at Marietta and walked away.

The collection of altar bread.

The following days, Young Marietta saved her pieces of bread in a tin box and as the lady had told her to keep it safe, she hid it in a hole under the trough at the far end of the garden.

In those days it was common to have a few animals even if you weren’t a farmer. A cow, two pigs, some hens helped the family to live through hard times and lowered significantly the cost of living. Tintoretto and his daughter often spent time there together to feed the animals or just talk about life, art, and religion.

One morning they found the beasts kneeling in front of the drinking trough. It was a funny sight at first, but as they wouldn’t get up, not even when Tintoretto beat them with a stick, the girl started crying.

She explained everything and Tintoretto, as angry as he was with his daughter, decided to prepare a trap for the witch.

Tintoretto, his daughter, and payback day.

On the tenth day, just like the old lady had said, she showed up on the way between the church and Tintoretto’s house.

The old lady seemed unsatisfied with that answer, but Tintoretto and his daughter had made up a plan to get the witch into the house. So Marietta immediately continued…

With that, the old lady seemed content and followed the child home. The girl opened the door and invited her guest in. With careful steps, the lady walked into the hallway.

But Tintoretto had armed himself with a spiked stick and as soon as the woman was inside the door, he blocked it and hit her over the back.

It really was a witch…

Immediately she turned into a black cat, but Tintoretto aimed a second blow at it and hit it over the head.

And so, the macabre dance continued where the painter tried to nail down the cat, who jumped, ran, and climbed the curtains and book shelves to try to get away from the artist who now was more like a demon than a painter. Terrible screams came from the cat. And just as Tintoretto was about to strike a final blow, with a blood-freezing howl the cat disappeared in a cloud of black smoke.

At that precise moment she was close to the outer stone wall, and the force of the magic cloud was such that it tore down stones from the perimeter and formed a big hole in the outer wall of the house.

Tintoretto and his daughter were saved, but to prevent any witches or other dark forces to ever enter their home again, when repairing the wall, Jacopo Robusti put a statue of Hercules on display. To fight off the evil.  .