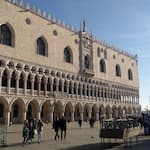 The history of the Republic

The Venice’ Republic lived on for 1100 years. From 697 till 1797, when Napoleon conquered the city. It Dominated the eastern Mediterranean for many hundreds of years. It was a feared and respected military power with a shipyard, the Arsenale, that could produce ships ten times as fast as any other country in the middle ages. It was an artistic and political front runner and it was a democracy even though the average citizen didn’t really benefit from that… And it was filthy rich.

Here’s the history of the republic, from the modest start out in the wet and muddy lagoon, through the golden and even more golden years, until the end and the surrender to Napoleon.

Venice is a unique city as it is. But the history and the origins of the republic is just as strange and overwhelming. A small city in a shallow marchland became one of the richest and most powerful states of all time.