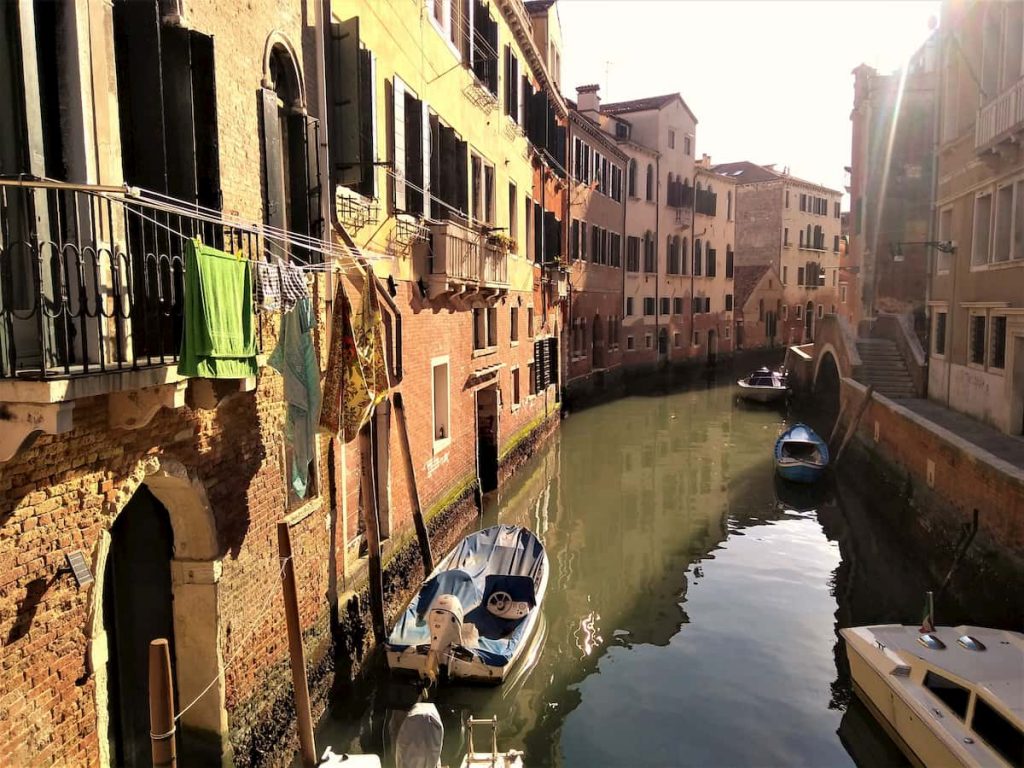 How deep are the canals in Venice?

The range of the depth in the smaller canals in Venice varies from almost nothing to around 2 meters (7 feet). In Canal Grande, the depth can be up to 5 meters (16 feet). On the outside of the city, it’s much deeper. The Canale della Giudecca has a maximum depth of almost 15 meters (49 feet) and between S;t Elena and Isola della Certosa on the eastern side it’s more than 20 meters (66 feet) deep. The deepest spot in the Lagoon is the Fossa delle Ceppe between Lido and Pellestrina, with around 50 meters (164 feet).

Canal Grande is the deepest part inside the city. The Water busses and other heavy traffic there, need a certain depth. But all canals with considerable traffic need to be reasonably deep, so to not create obstacles even if the tide is low. Some of the smaller waterways are really shallow, and at first sight of low tide, the bottom becomes visible.

Here’s a nice map with all the depths of the lagoon. The measurings are from 2002, but it gives you a good idea of the underwater structure.

Calculating the depth considering the tide. 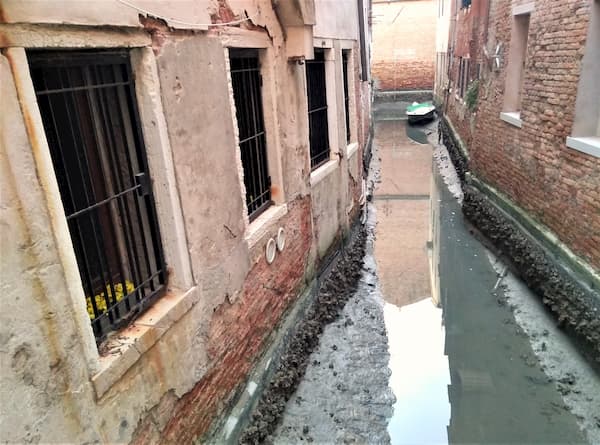 On that occasion, even parts of Canal Grande displayed stranded Gondolas and the muddy bottom laid in plain sight. At least along the shoreline. But even if the variation normally isn’t that dramatic, the boats don’t have the same street-map at high tide as they do at low tide. If you should opt for a taxi, when going to your hotel, that is something you should be aware of.

How many canals are there in Venice?

In Venice, there are 178 canals. This number is somewhat inaccurate, as it isn’t very straight forward to decide what is a canal and what is not. Some of the smaller canals are so small that not even the tiniest boat can pass at low tide. Some others still are dead ends. But let’s say between 150 and 200. 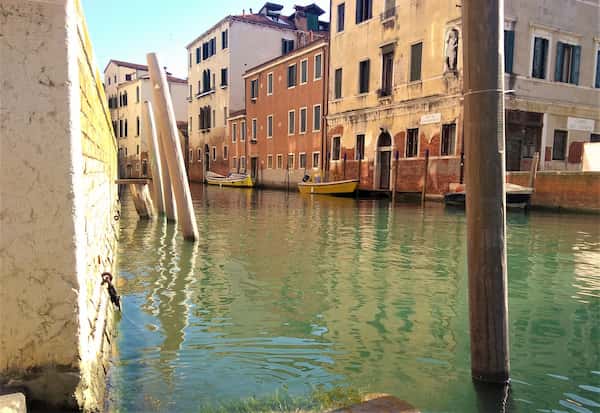 To be even more precise, a small waterway isn’t even called canal, canale in Italian, or canal in Venetian. It’s called Rio. The word canal is used exclusively for the main streets… Canal Grande, Canale della Giudecca, Canale di Cannaregio. Apart from these, Canal is also the denomination of all the hidden passages underneath the surface of the lagoon. These canals were once the defence of Venice. When other cities had fortification, walls, and watchtowers, Venice had its canals, hidden between mud and clay. And keeping them securely hidden was a matter of life and death.

Are the canals in Venice all man-made?

Well, this is an interesting question. No, they’re not all man-made. Actually none is, in the normal sense. Venice started out as a few sand-banks. Between them there was water. As the city grew, the water between the settlements became ever more narrow, until all that remained was a few feet of water between my house and my neighbor’s house. And the canal was born. They had to deepen it and secure the side walls, in that sense they are man made.

And some canals were rivers in the beginning, or, to be more exact, they were the kind of canals mentioned above, that were hidden in the lagoon. Because those canals are rivers… Rivers that run into the lagoon from the lands side, and then they continue, eroding along their way until they reach the open sea.

Canal Grande was one such river, the Brenta, that now runs through Padova. In ancient times it was called Medoacus Maior, and it had another stretch… Still, it was the same river that started out high up in the mountains, continued through Bassano di Grappa, Citadella, Padova and finished ìnto the lagoon west of Venice.

Scan of Venice and the whole lagoon.

In 2017, The Institute of Marine Sciences of the Italian National Research Council (Ismar-Cnr) and the Hydrographic Institute of the Navy (Iim) carried out a survey of the detailed morphology of the canals of the Venice lagoon. The result was two-part: First, a confirmation of what we already knew. For example that they are pretty full of garbage, old refrigerators, shopping carts, and car wheels… A lot of car wheels.

Second, some extraordinary results, especially the effects big vessels have on the bottom of the main transit canals. 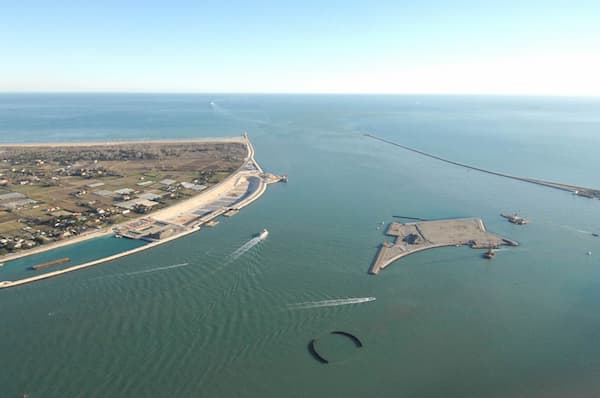 The water in the small canals in Venice tend to sediment material on the bottom, and every year they get shallower. But the huge canals leading in and out of the lagoon through the three openings, north, between and south of the two long islands, Lido and Pelestrina… These canals are getting deeper for every ship passing. The huge hulls with their enormous engines whip the water and the sludge on the bottom.

The result is a mini-tsunami every time a ship passes. The sediments that are pulled up from the bottom are then pushed out in the open sea with the tidal forces. And the already very deep canals are getting deeper every time. Something that might seem beneficial for commercial traffic, but really is a disaster from a high-tide-point-of-view. The easier the water can get into and out of the lagoon, the bigger the problems with high waters in Venice.

Do they do any Maintenance to keep the small canals navigable, and the big canals shallower?

They used to, yes. The canals in Venice used to be overhauled systematically. But lately, there haven’t been all that much enthusiasm about doing that. Until a few years ago the maintenance was carried out with a regularity

that depended only on how long it had been since the last time. The canal was closed off. Then it was drained and thoroughly cleaned. The foundation of the houses, as well as the bottom and the sides of the canal, could be monitored and if necessary, repaired.

Now, since there isn’t enough money in the city Treasury, they have turned to another technique… The wet-method, which is nothing other than dredging. This method is good to deepen the canal, but it doesn’t permit any surveillance, nor any maintenance or repair. It’s a kind of last effort to keep the canals navigable.

The big canals, on the other hand, are much more difficult to fix. You would need to add material instead of dredging it away. The solution, as already mentioned a million times, is to avoid heavy ship-traffic inside of the lagoon. Unfortunately, somebody placed a huge harbor right there a hundred years ago, and now maybe we just have to live with that.

So maybe they will all dry up then?

No, they will not. But the foundations of the houses, the walls of the canals in Istrian stone, and all the ingenious craftsmanship that has withstood high waters, currents, and subsidence for a thousand years, are at risk. It is not so much the canals. It’s everything else that is facing enormous challenges. And the biggest challenge of them all are the rising sea levels. 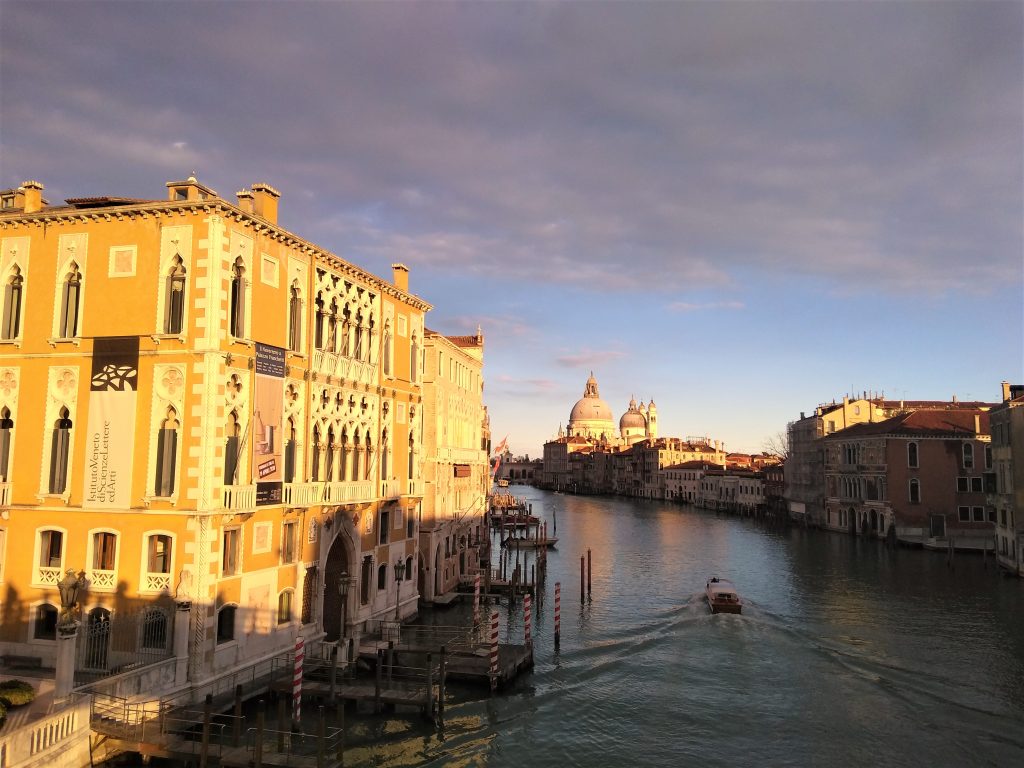 … Now, really, are there sharks in Venice?

Well, actually there are… Or there could be. No, not that you would have any possibility to be able to witness one splashing around in Canal Grande. And you shouldn’t avoid taking a dive into the canal for that specific reason… There are other strong reasons for not swimming in the canals.

A variety of sharks are found in the Mediterranean, and a few observations have been made inside the lagoon. In those cases they have been seen at the inlets or at least in the deep canals on the eastern side of the lagoon. Sharks have never been spotted inside the city. The Blue shark, the Fox shark, and the most probable… the Blacktip shark, that is known to venture into brackish- and even sweet water on occasions are all possible intruders.

The Great white doesn’t go into brackish waters, so they wouldn’t enter Venice… Fortunately so…