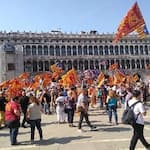 What is it about the 25th of April?

Well, first of all, the 25th of April is a public holiday. It’s the day of the liberation. In 1945, on the 25th of April, the North Italian National Liberation Committee CLNAI declared the final and total uprising against the German occupiers and around that time the occupied territory in the north was freed, Venice was liberated the 28th.

LIberation? What liberation, you might think. Wasn’t Italy allied with the Germans? So it must have been a surrender? 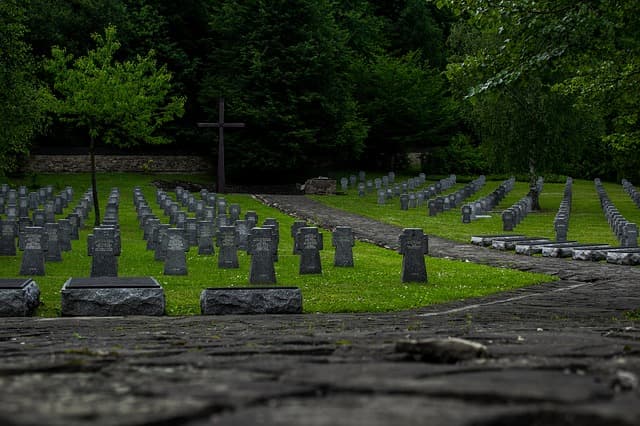 Not really. Italy was a part of the Axis forces but had surrendered already in 1943. The Italian people were never really so enthusiastic about the fascism, the treaty with Germany or the war. When the allied invaded Sicily, the fascist party decided to limit the power of their leader Benito Mussolini. Something they actually could do. That fact explains something about the authority or none authority of the Duke and the contradictions inside the Italian political landscape. Just imagine the Nazi-party firing Hitler, and you understand something about the difference between Italy and Germany at that time.

Anyway, the king Victor Emmanuel III simply fired Mussolini and put him in jail. Then he formed a new government together with the General Pietro Badoglio. Still fascist, but secretly negotiating with the allies for a surrender. The 8th of September an armistice was announced, and Italy had formally surrendered. From that point although there was quite a bit of confusion on the Italian peninsula, the Germans strengthened their presence, the allied troops advanced from the south and the Italians mostly started fighting their former brothers, the Germans. In Rome, only one Italian division was defending and the Germans could easily take the eternal city. They freed Mussolini and he then created the Republic of Salò in the north.

So the situation was that of liberation. The 25th of April represents the beginning of the final victory for the resistance and the allied forces. The Partisans captured and killed Mussolini on the 28th of April. On May the 2nd the Republic of Salò surrendered together with the German troops in Italy and on May the 8th the war ended.

The 25th of April is the anniversary of the liberation in Italy. As such it is a national holiday and we have the speech of the President, parades, brass bands and the Italian flags with its three colors… Il Tricolore.

The other 25th of April.

But in Venice, we have yet another public holiday (Couldn’t they have them on two different occasions? So we could be home from work on two days instead of one?). So here you can choose: Celebrate the liberation… Or, commemorate the death of the Patron of Venice, San Marco. He’s supposed to have died on that day, although deaths and births 2000 years ago are a bit approximative. 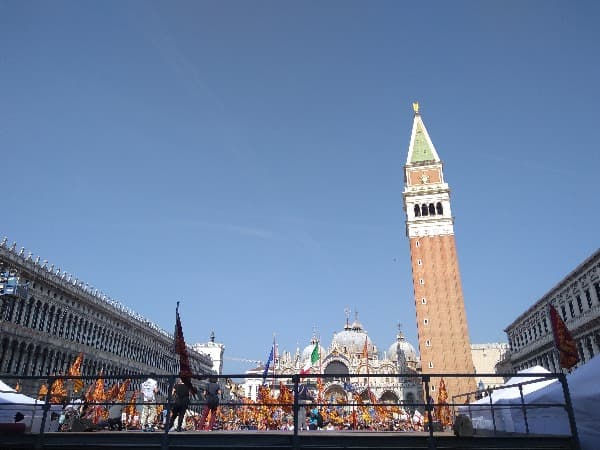 Saint Mark’s day the 25th of April was a very important holiday in the days of the Republic. There was a procession at Saint Mark’s square in which all the authorities of the Republic participated, the Doge, the Patriarch, and every other important person. But the Saint was such a central figure in the Venice’ life that they celebrated him on two more occasions. The 31st of January, when the relics arrived in Venice in the year 828, and the 25th of June, when the bones were placed inside the Basilica of Saint Mark’s.

And now to the present political situation in Venice and Veneto. The separatists in many regions in the north of Italy are strong but nowhere as strong as in Veneto. The last election gave an absolute majority to Lega Nord, whose full name is Lega Nord per l’Indipendenza della Padania, The Nordic league for Padania’s independence. Padania being the Po-valley often used in a sweeping political sense as northern Italy. Interestingly they dropped the “Nord” in their name and got so many votes in the last national elections, that they could form a government together with the 5-star movement. A party who was founded on an idea to free the north from Rome is now governing the nation in Rome.

And this leads up to a situation where celebrating Saint Mark and celebrating Italy becomes contradictory. It’s a bit like a soccer derby. Two teams from the same neighborhood meet and the fans are just a bit too enthusiastic about cheering for their own boys. It can get rough. 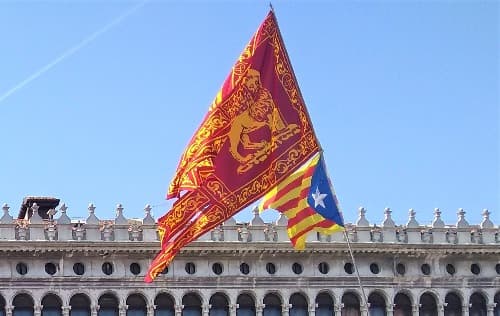 The Italianists don’t come to Saint Mark’s square. They go elsewhere or stay home to be able to watch national TV without interruption.

And on the 26th life goes on a usual, Because there is no people in the world with as good spirit, welcoming attitude and forgiving approach as the Italians. One day you’re enemies and the day after you offer a cup of coffee and that’s that.

Another holiday? How many do they have..?

Yes, there is another reason for celebrating. Or maybe not celebrating, because this is a very sad story. (… Now, come on. One holiday when we could have had three days off work..?)

At the end of 700 when the Republic still wasn’t in Venice, but on the mainland, the daughter of the future Doge Angelo Partecipazio, Maria fell in love with the young, handsome but inexperienced Tancredo. He needed to make a name for himself to be able to ask for her hand in marriage. So he went with Charles the Great to Spain to fight the Arabs. He was a brave soldier and had already started to distiguinìsh himself for his value on the battlefield when he was hit by the enemy in a counterattack. He fell in a  rose garden and with his dying breath he took a rosebud colored with his blood. He asked his friend Orlando to bring it to his beloved Maria and tell her that his last thoughts were of her. Maria got the rosebud but the day after, 25th of April, she was found dead with the flower pressed to her chest.

From that day it’s a tradition in Venice, to give a rosebud to the lady of your heart on that day. 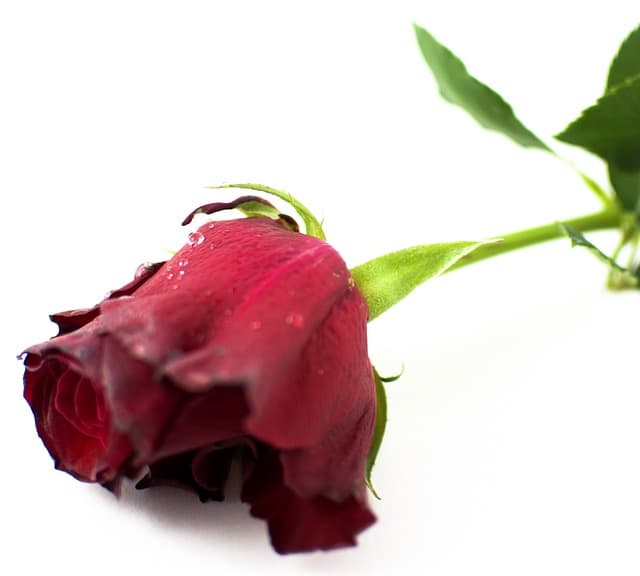