You may not know this, but Venice was actually the coffee capital during the Renaissance. The best Coffee in the world was found in Venice, in the bars, and in the shops. Despite the touristic touch of late, you can still find some extremely well-tasting java here and now I will tell you where to go to get the best coffee in Venice 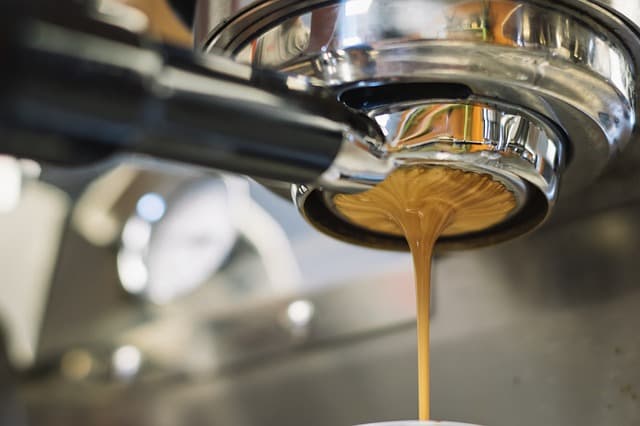 In the middle ages, the practice of grinding the coffee beans and mix them with hot water spread across the Arabic world.  The origin was possibly Ethiopia and from there it slowly came north. It was a very popular drink among nobles and others with money to spend. Considered a healthy, strengthening and even aphrodisiac beverage it finale reached Constantinople – Istanbul in the 15th century.

The word coffee comes from the Arabic word Cahwah, as it’s written in the Latin alphabet. In Turkish, Kahve. And it was right there in Turkey, or the Ottoman Empire, that the Venetian traders got their hands on it. They learned how to make Coffee from the beans from the locals and being what they were – Venetian businessmen, they soon perfected the process and started to commercialize the black gold in the west.

Gianfrancesco Morosini, the Venetian ambassador in Constantinople wrote about coffee already in 1585. And by the beginning of the 17th century, the first sacks reached Venice. It was considered a medicinal herb but very soon it started its triumphant conquest as a social beverage. It was good, it had a long list of beneficial properties, and it was exclusive and expensive. Drinking coffee was also a class thing, the poor and the poorly educated drank alcohol while the smart, beautiful and wealthy drank coffee.

The church, on the other hand, didn’t enjoy the new trend. It was black and it excited the drinker. Originated from the Arab world it was frowned upon. Fortunately, Clemente VIII who was Pope at the end of 1500 and the beginning of 1600 loved coffee. And he loved it so much that he had to think of something to be able to drink a lot of it. This beverage of the Devil is so good that we have to try to trick him… By baptizing it, he announced and so Coffee got baptized and everybody could enjoy it without risking their eternal soul.

Well, the drinking of Coffee soon went from being an extremely exclusive drug, used only for medical purpose, to become a social beverage to be drunk in Coffee houses. The very first real Caffè was opened in 1720 by Valentino Floriano Francesconi. Some say it’s the first Caffè in the world. The name was Alla Venezia Trionfante. It was an immediate success although the name didn’t stick to people’s minds. They simply called it The Floriano, or correctly in Venetian dialect: Florian.

And the winners are: 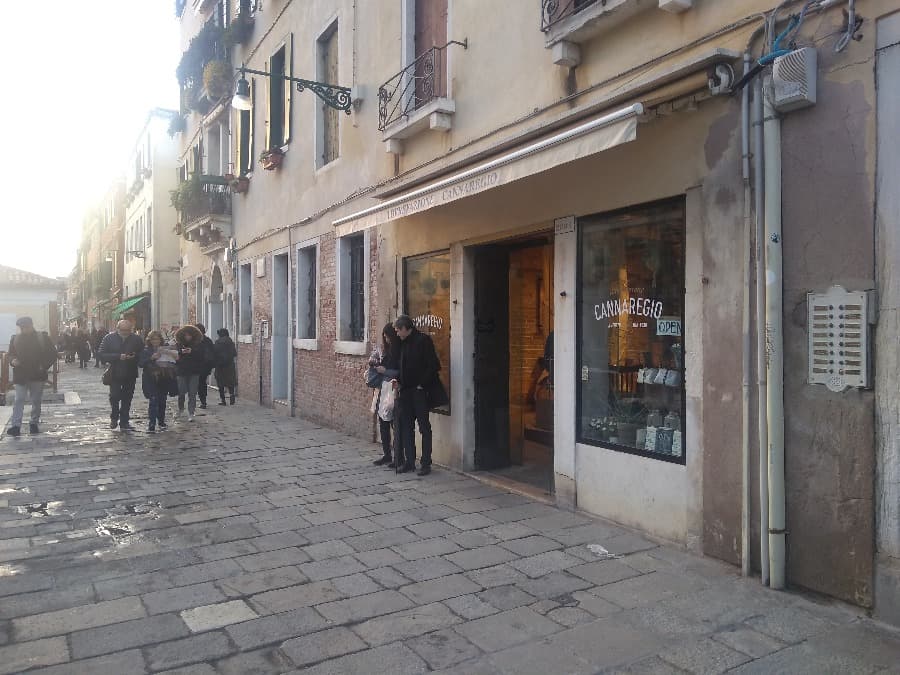 We’ll come back to Florian but we’re going to look out over La Serenissima and try to find what is the best Coffee shop in Venice today and we’re going to try to get ourselves a really, really good cup of Coffee. To do this we will start at the long and relatively straight street called Strada Nova. In fact, it is the only “Strada” in Venice, while all the others are called Calle, Path. Strada Nova was created at the beginning of the 19th century, by the Austrians, and it soon became a very lively trading spot. 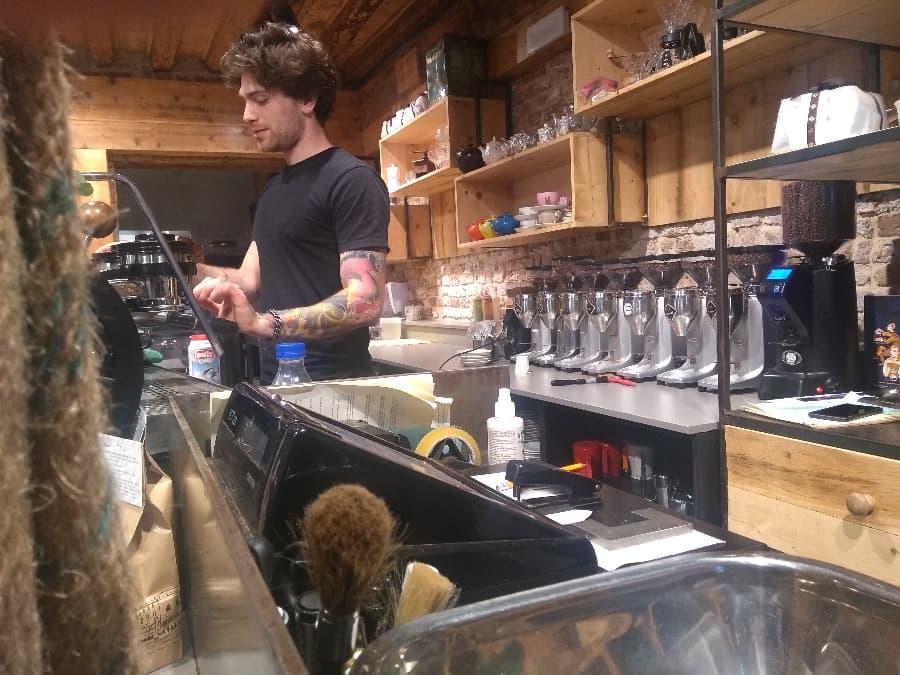 Right here was the home of the Torrefazione Cannaregio, opened already in 1931. I say was because last year, after having problems with skyrocketing rents – A very common phenomenon in recent years – they decided to change location. Now they’re found right outside the Ghetto, in Fondamenta dei Ormesini. The new location is perfect, tranquil yet busy with a steady flow of locals and tourists. And as a client, you can enjoy the newly restored interior in brown and beige that goes very well with the subject.

The word Torrefazione means roastery and they not only serve coffee of their own production, but they also sell ground as well as whole beans in various qualities. On display, there are multiple pure Arabic coffees from all over the world and if you ask nicely you can even have a blend with a little Rustica in it. Although for me the pure Arabic is fuller and better.

Heading back to Strada Nova and continuing to Rialto, cross the bridge, and turn left on the other side following the Canal Grande. Then take Calle Cinque to the right and you’ll end up at Caffè del Doge.  This is my personal favorite. It too has a variety of different qualities and blends, and you can go through the whole world here just sipping one cup after the other. 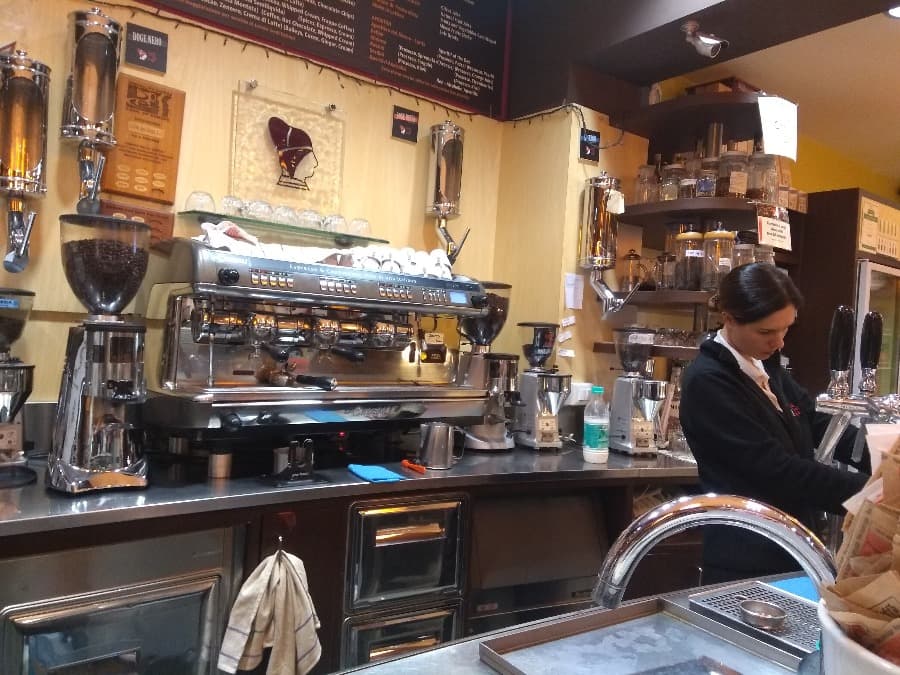 The location is interesting. We are in the dead center of the city, but this little Calle is still hidden from the mainstream. It gives the caffè a touch of genuineness. In fact, you see a lot of locals and gondoliere, and the atmosphere is. though not laid back, still a little more human than the surrounding restaurants. The locals also come because it’s one of the best Caffès in Venice, if not the best.

They also have some good pastries if you would like to combine. The Italian way is never to mix the two, though. You eat your sweets and after that, you drink your coffee. The coffee taste is what you’d want to take with you. The coffee is always the last thing, be it a snack, a chit-chat break, or a full dinner. 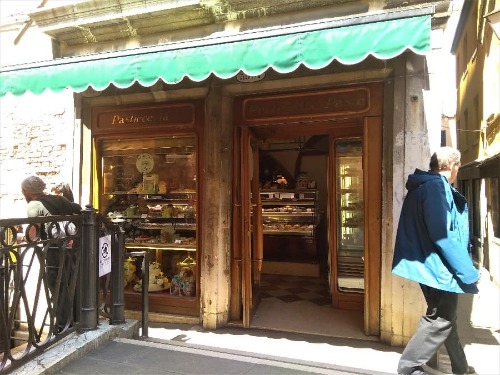 The next stop is not a Torrefazione and it doesn’t have much of a choice when it comes to coffee. But it’s still a genuine, quality Caffè who has seen thousands of tourists and Venetians come in for a sip and a sweet. It’s actually a pastry shop and it’s situated on top of a bridge, halfway between Campo San Lio and Corte Spechiera. The name is Ponte delle Paste, the Pastry Bridge. The sweets are all handmade right there. The chocolate is awesome and any of the pastries are recommendable… And the coffee is good. They don’t have all the different sorts as Torrefazione Cannaregio and Caffè del Doge, but they use the excellent Julius Meinl and the smell of the rich espresso is enough to convince you to stay for another cup. 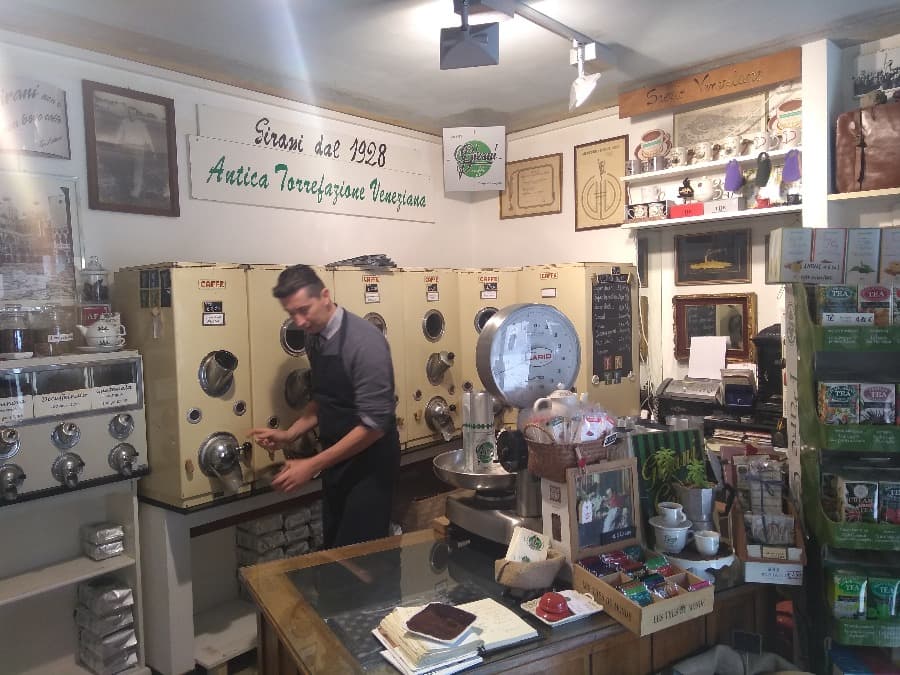 Now we’re going down to the crowded tourist district around Saint Mark’s Square. Crossing it and continuing down to Riva dei Schiavoni where all the Vaporettos and Gondolas are. Turn left, over the Straw Bridge, and over three more. At the first opening in the wall, turn left and you end up at Campo Bandiera e Moro. Here’s Caffè Girani. It’s not really a Caffè. It’s another Torrefazione and the oldest in Venice still in use… As well as the only one. Because all the others have all their production on the mainland, where the costs are lower. 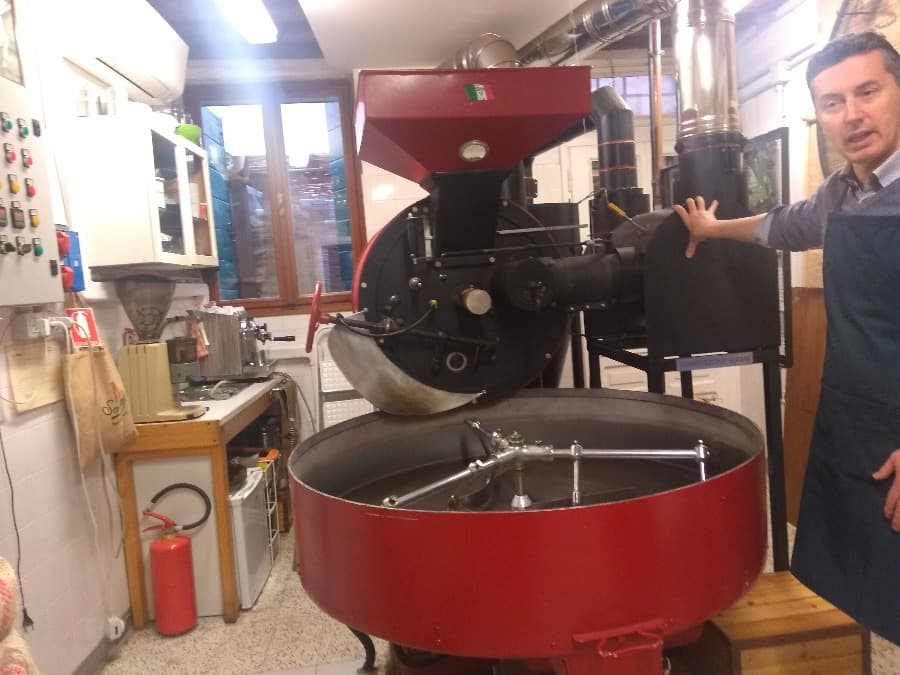 Caffè Girani started out in 1928 and thus beats Torrefazione Cannaregio with three years. The machinery is right there behind the small shop and it’s working every Monday morning. They make a few different blends as well as pure Arabic. As I said before it’s not a Caffè. You can’t drink your coffee here. But you can buy some really unique beans or coffee grounds and if you come on a slow day, you can get a lesson in coffee toasting, drinking, and quality measuring from the owner. You have to come early though. They close at 12.30 p.m. and remain close in the afternoon.

Step over to the Bar next door to taste the products. They make their coffee from Girani-blends. 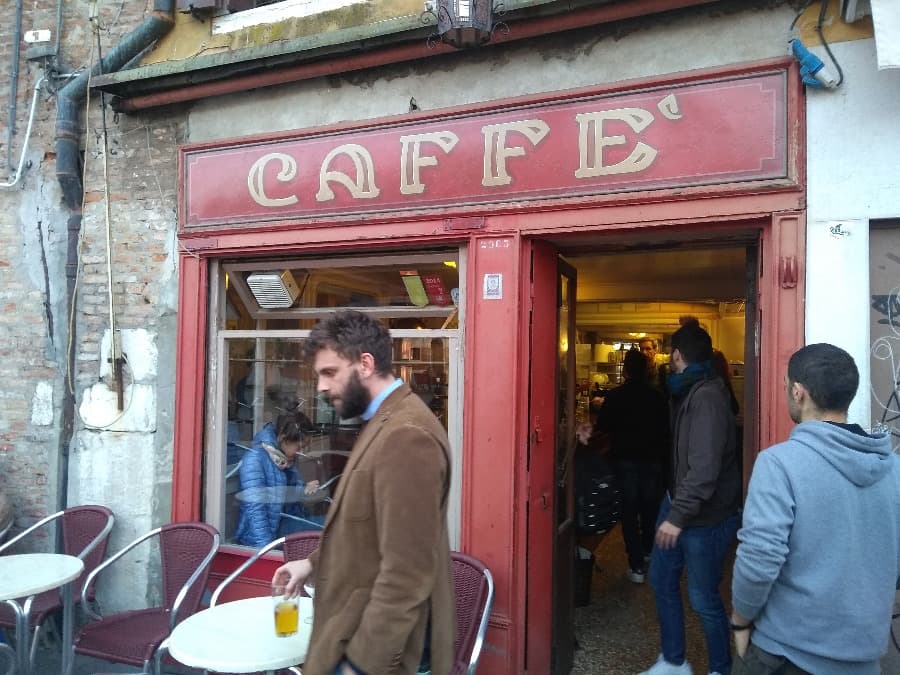 Now it’s over to Campo Santa Margherita. The buzzing student area where people stay up until very late and the bars don’t close until the morning light. On the western side, about in the middle, there’s the red caffè, il Caffè Rosso. The color is actually red but the nomination probably derives from a more political shade.

The Osteria Al Capon, now Antico Capon at the opposite side of the Square was a location for politically engaged workers in the harbor. Eating and drinking they started to build a reign of old Venetian values. They had a Doge, Ambassadors, and even executioner. The Caffè Rosso on the other side became the enemy state and for many years lively political debates filled the Square as the representatives for the two factions practiced not only matters of national security but also deepened their knowledge in connoisseurship. 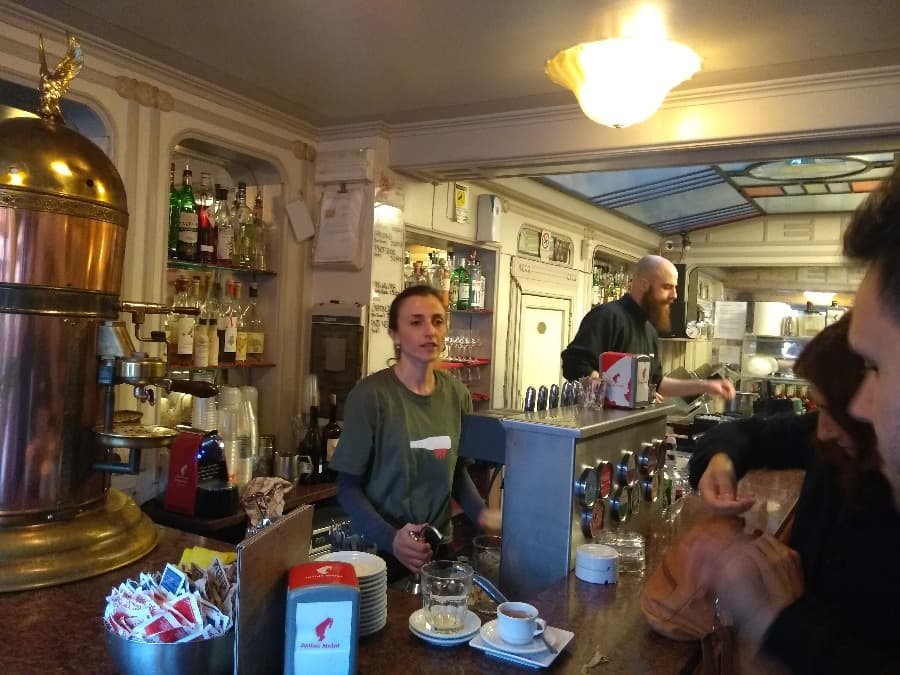 Now Il Caffè Rosso is a well-known meeting spot for youngsters and students. In the morning it’s more like a normal Caffè. You can have your Cornetto with a Cappuccino or a biscuit with a dark espresso. In the evening though, it gets crowded and lively. And instead of a Coffee, you should try a Spritz Aperol, Campari or even Cinar. It becomes a Party-Caffè just like all the rest of S:ta Margherita for that matter.

Most expensive coffee in Venice – Florian

So, in the end, we come back to where we started out. Caffè Florian. The oldest Caffè in Venice, in Italy, and maybe even in the world…

Running uninterrupted for 300 years, it’s still there. On Saint Mark’s Square. And it still offers music as well as impeccable service and excellent coffee. It’s full of traditions, it’s part of a time when Venice still was the most fashionable city in Europe. When every important person had to live in, for a period of time, or at least having visited Venice. 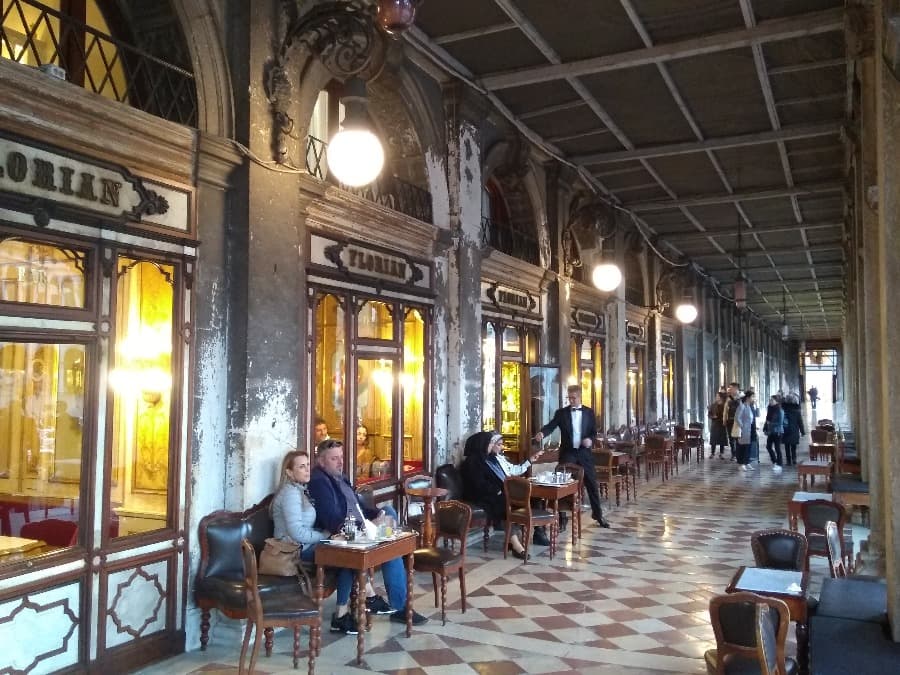 The coffee is from their own production. Venezia 1720 it’s called and it’s a blend of various qualities of Arabica. It’s very good, full and rich. But the best of all when you decide to sit down at a table in the Square and listen to the excellent music while you drink your coffee. The best of all is that you will be able to put the receipt in a frame and hang it over the fireplace. And you will be able to tell your children and grandchildren about the most expensive coffee you’ve had in your life…