Every February, or sometimes in March, for a few weeks Venice becomes a playground for adults. The city is invaded by hoards of party animals filling the narrow paths to such an extent that the local police has to limit the Calli to one-way traffic only. About this phenomenon, the thoughts vary a lot. From those who say it’s just a lot of noise and drunk people dirtying La Serenissima, to those who love it and take out their holiday to match the period of the Carnival. If you like it or not, there’s still one thing that we all can agree upon. One aspect of Il Carnevale that conquers all and sets every disapproval aside… And that’s La Frittella or La Frito’a as it’s called in dialect. 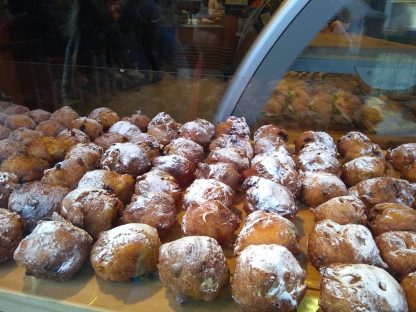 La Frittella is a wonderful pastry that’s served in this period and only in this period. It’s full and heavy and if it’s made in the correct way it has that perfect balance of sweet and rural aroma, characteristics which have made it famous in all the world. It’s the Queen of all the wonderful Venetian dishes and it has no equal in its simplicity and its excellence.

The recipe is quite simple. Eggs, flour, butter, and milk. Throw it all in a bowl and add some raisins, some pine nuts, a little vanilla, and a pinch of salt. And of course, yeast. Then you form roles, an inch or a little more in diameter, deep fry them, and you’re done. Now even if this seems simple enough, you will find a huge variety of taste and quality. First of all, many have fillings. Custard, Eggnog… Nutella and sometimes you can find even stranger things inside them. So to add to the great difference in baking perfection from one pastry shop to another, you also have to judge the content, the stuff inside.

The conclusion is that it’s better to study the Frittella in a scientific way and try it in as many different places as possible, in one pastry shop after the other. That’s what I do.

The word, Frittella, doesn’t actually imply something special. It means it’s fried or deep-fried, fritto, no more no less. And this word can get you anything from sweets big as a dinner plate to something not sweet at all, depending on where you are. But the Venetian Frittella is by far the most famous.

The origin dates as far back as in the Roman empire, and maybe even further. Although back then it probably was quite different. The Romans had a sweet called Frictilia, which is something similar. Anyway, in Venice, they have always done them. It was a simple but exquisite pastry and it became immensely popular.

In the 14 century, the Republic confirmed the official recipe of the Frittella, the one and only way to cook it. Today that document is deposited in Rome, in the Casantense Library. And it’s the oldest written gastronomic document from the Republic of Venice existing today. 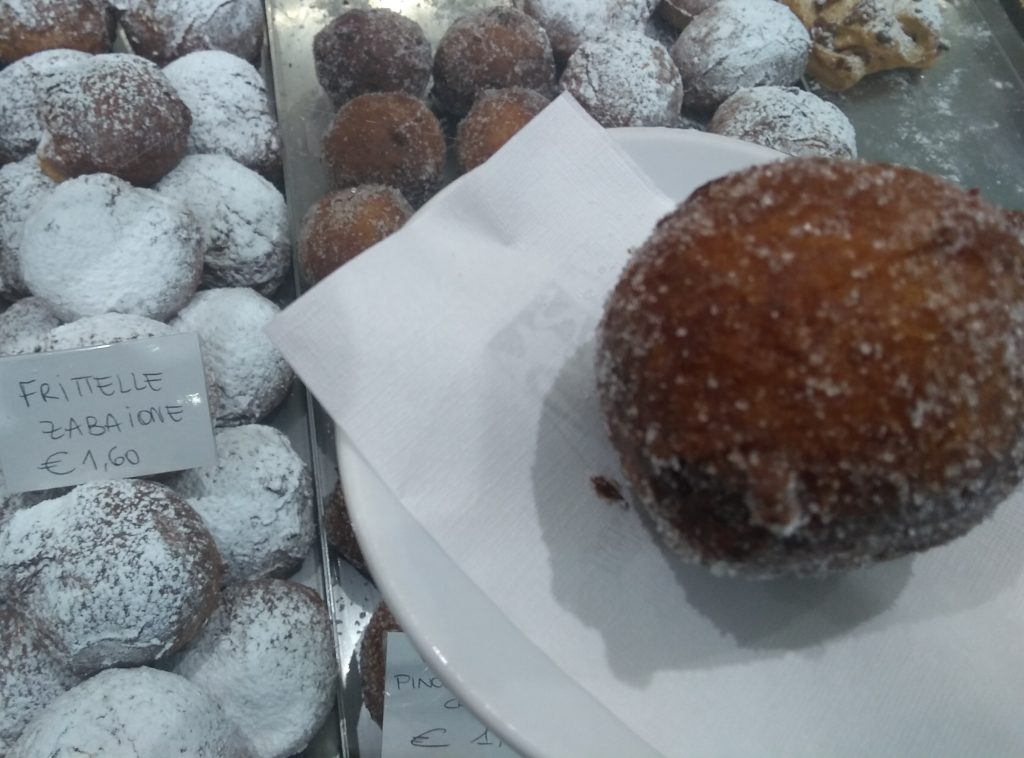 In the 17th century, the bakers specialized in baking the Frittella, created a Guild. There were 70 of them and they divided the city between them, in restricted areas, and inheriting the trade from father to son, cutting everyone else out. They often fried them outside, in oil, lard, or in butter, and they were sold immediately.

In the 18th century, it was declared the Official Pastry of the Republic of Venice.

There are two reasons why they even exist and why they’re made in this, particular way.

The first has to do with the ingredients. Flour, eggs, milk, sugar, well that’s what more or less anyone has a lot of. And they had it also back in the middle ages. Plus the fact that in this period there was an abundance of lard. The pigs were traditionally slaughtered in winter. Before Lent, which starts forty days before Easter, there was a period of surplus, which ended with Shrove Tuesday. You were supposed to eat meat, pork and all kinds of derivatives as well as for example Frittelle. And these were very often fried in Lard.

The word Carnevale probably comes from the Latin words Carnem and Levare, Meat and Remove, indicating eating in excess the week before Lent. In fact, even today the Carnival in Venice finishes with the Shrove Tuesday.

So the second reason is right there, with the week before Lent, the Shrovetide. The Carnival week, or weeks, was eating time. And there’s no better way to fill up with calories than eating Frittelle.