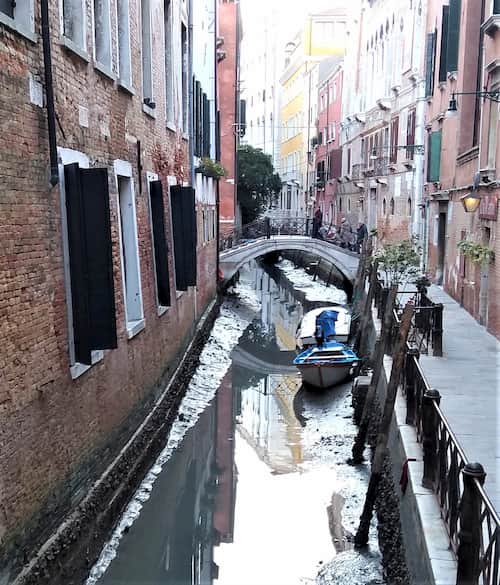 It’s really amazing how life changes sometimes. Not more than 2 months ago we had the worst week of high tides ever. Damage worth of hundreds of millions and inestimable costs for restoring lost cultural heritage.

And today when I looked over the handrail of the canal I found this.

Not that I’m complaining… We rather have low water then high, no doubt about that. And it’s not the first time it happens. Last year we had some very low waters as well, and it happened in January.

It’s because of the beautiful weather.

The high pressure keeps the water low. And together with northern winds and low temperatures that keep the water in the mountains restrained as ice, the sea stays at sea and doesn’t come into our homes.

And then, off course, there’s the normal tide movement from the moon, and the sun.

Low tides cause problems too. (Jesus… If it’s high they complain and if it’s low they complain. Are these guys never happy?)

First, there’s the smell. At low tide, there’s always a little odor from the rottening algae on the poles and underwater barriers, but when it’s this low and the whole canal is dry it’s worse. Although with these temperatures it’s not all that unbearable.

Second, there are the house-ground problems. The water penetrates the wall when the tide rises. Then when the tide goes down again the water inside the wall comes out. It’s just that when it’s coming out it brings some of the wall with it. Microscopic pieces of stones, bricks, and cement. It’s normal, but the bigger the difference between high and low, the bigger the problem. It doesn’t show right away but after ten, twenty or a hundred years, it can be very costly. 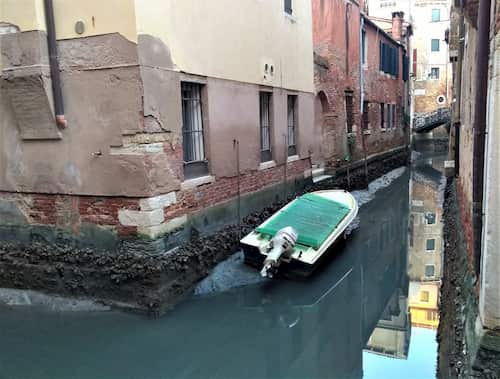 Third, the boats can’t come through. Ok, it doesn’t really bother me that the Gondoliers can’t work. Nor do I really care if the taxi can’t reach the private dock at the hotel and some tourist has to walk a few hundred meters.

But I bought a new dishwasher the other day (…cause the one I had, went crazy and started dishwashing when it wanted, morning, evening… midnight), and they can’t deliver it. So we have to wash our dishes by hand… Yeah, I hate that.

Fourth, it’s ugly. To me, there’s nothing as sad and wrong as a boat on land. I know that maybe it’s just me, but I feel it’s so incredibly awkward to see a beautiful yacht on dry land, showing its keel and rudder to everybody like a naked person. Exactly the same feeling comes over me when I see the small wooden boats and gondolas at the bottom of the canal, trying to maintain some of their dignity while wallowing in the mud. It’s a very sad image.

So we’ve spent 5,5 billion euro on a huge project to be able to save us from the high waters. We’ve been building on it for 17 years and it still isn’t ready. We’ve put people in jail over it, we’ve changed political outcomes of elections over it and we’ve been looked upon as morons from our fellow Italians because of it…

Wouldn’t it be cool if we could use it and benefit from it somehow in the end? And even if it won’t work as it’s supposed to and we still can’t keep water out, maybe we could keep it in? 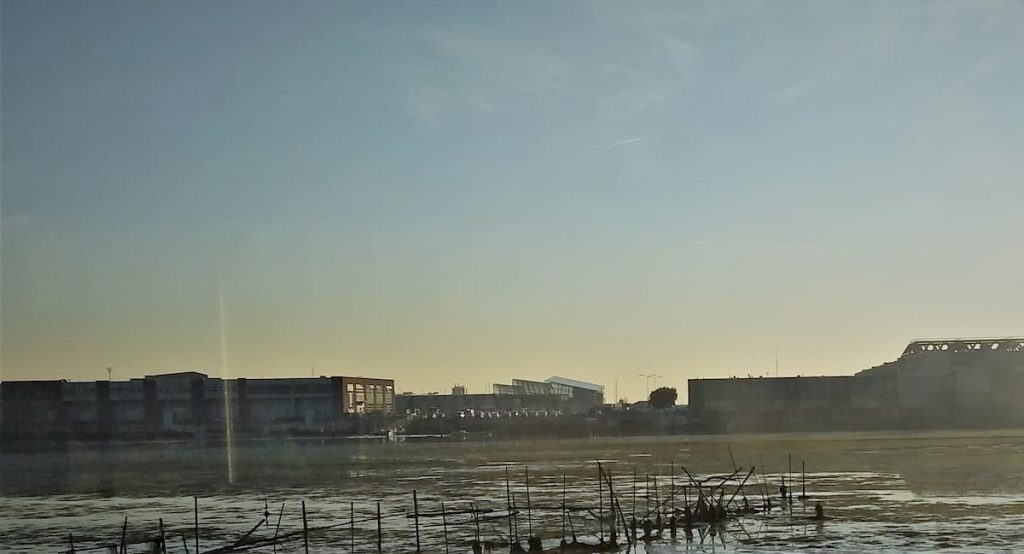