What is the meaning of the Carnival? 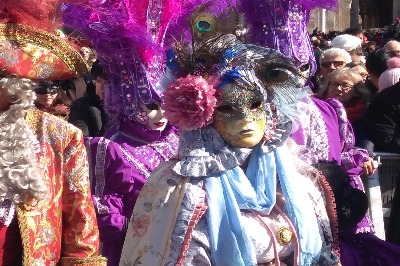 Just the other day I was talking to a friend of mine. He’s not a young man and he used to live at Cannaregio in the fifties and sixties. Back then there wasn’t any Carnival. No Flight of the Angel on Piazza San Marco, no Water-Shows on Canale di Cannaregio and no invasion of tourists. It was more or less just the ordinary life going on as usual.
But the kids weren’t satisfied with that. They needed more… So they invented all kinds of jokes and pranks, just to have a bit of fun. They used to buy flour from the local groceries or just steal it from their mother’s pantry.
With the paper bag in one hand, they went out in the street and started throwing the flour on each other. After that, they got into throwing it on others, and that was much more exciting… And dangerous. If the other, happened to be someone who could identify them, then it could mean a beating and being stranded for a week or two. 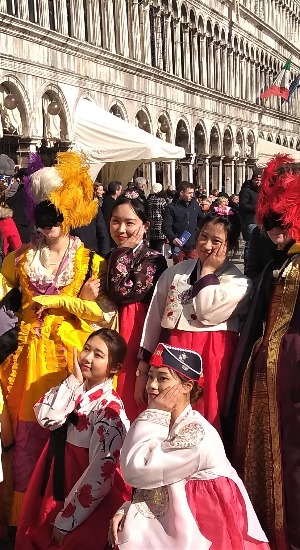 The best time was when it was raining. One can only imagine the poor mother’s face when one of her children got home after a whole day of street war with white flour on a rainy day.
He also told me, they used to swim in the canals. Something I wouldn’t recommend today. They even jumped from the Ponte delle Guglie, which is quite a high bridge. The target was to jump right in front or beside a boat so that the water sprayed the passengers. Often they had to run away from a suddenly appearing police boat, half-naked and shivering.

It’s a wonderful event with thousands of people having a good time together, eating and drinking, showing off, and enjoying the moment. But maybe it all started with children playing and inventing every kind of practical joke. And then, afterward, they put an organization on top of it, and they ended up with the Carnivale di Venezia.
Because at the end of the day, we don’t need the Carnival. Nobody does. The party is OK all by itself. It doesn’t have to be so well organized. To enjoy life you don’t really need all the packaging… A good meal, a glass of wine and maybe a Frittella. A disguise, good friends, and cheerfulness. There’s the real Carnival for you… And it doesn’t even have to be in Venice. 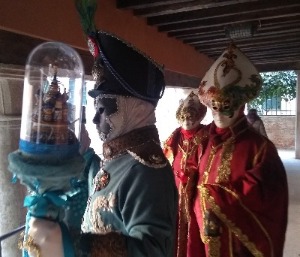 And then, the Venice Carnival isn’t all that uniform. It is not one, single, antique holiday imposed by the Catholic church. It’s not some remembrance of an occasion in ancient times when someone was miraculously saved by a Saint. The Carnival has some very old traditions as a ground plate. On these, they then built the modern Carnevale di Venezia as we see it today. And one of the most important traditions is La Festa delle Marie.

And this is how it goes…

One of the oldest Christian holidays is the Feast of the Purification of the Blessed Virgin Mary also known as Candlemass. It is celebrated 40 days after Christmas and anybody knowing about mathematics realize that the day would be the 2nd of February. Actually, one day is missing, but in ancient time the days were a bit shorter. The purification of the Virgin Mary was a very important feast in Venice. That day, every young couple who was engaged to get married that year got blessed by the Bishop in San Pietro in Castello.

Among the young girls there were some who really didn’t have enough nor for the dowry, neither for all the rest, the dress, the jewelry, and the eating and drinking. So it was decided that to help the necessitous, twelve of the poorest, but most beautiful of the future brides, would be dressed and decorated by the noble families. And the state would pay for the banquet and thus giving the opportunity for even the least propertied of the city to marry. 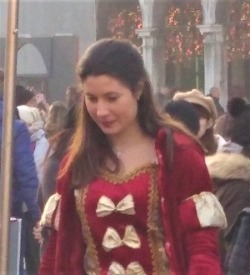 In the year 943, during the ceremony inside the church of Castello, the whole city with the noble families all present as well as the Doge himself was caught completely off guard by pirates. The ships from across the sea, from Dalmatia, had sailed right into the lagoon and while everybody was engaged in the celebrations, they just landed right outside the church, went in, grabbed the twelve girls with all the jewelry, lent to them by the state for the occasion, and sailed off.
The Venetians were heartbroken and desperate. How could they have let this happen? Twelve of their most valuable virgins were gone… And so were the jewels from the city bank vault, as well as the dowry offered by the nobles. Action was called for and it took the Doge no more than 12 hours to prepare and send out ships to pursue the pirates.

On the sea, the Venetians were a capable lot. They had fast, strong vessels, and they could row as well as sail. So, outside Caorle in a place which after that became Porto delle Donzelle, they caught up with their enemies. There was a battle and the Venetians saved the girls and killed every single one of the pirates. The spot where it happened has changed the name since and today it’s called Porto Santa Margherita if you would want to visit it. 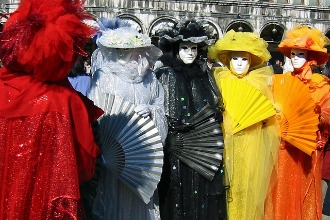 This went on for hundreds of years, but as time went by, the safety and more so, the moral conduct of bridegrooms and admirers of the poor girls went to exaggeration. And the relationship between the different families of the poor girls as well as between the rich giving away and the poor receiving often led to quarrels and even hatred. So in the 14th century, the real girls were substituted with copies, statues in wood. The Venetians angrily rebelled against this change and it’s interesting to read a law instituted in 1349 that reads: Anyone caught throwing vegetables or other plants or fruits on the statues during the feast of the twelve Maris, will be sentenced to jail.

In 1379 it was abandoned altogether. And since then no Festa delle Marie has taken place in Venice, although the Carnival lived on. Until 1979, when the new Carnival was introduced, and they kicked life into a whole lot of the old traditions again. And now every year the most beautiful of the twelve Maris gets to be the one flying high over Saint Marks Square in the Flight of the Eagle, the event that officially opens the Carnival.

And apart from that, she gets married,…