So if you walk away from the city center. Just stroll along towards Arsenale. No, not on the quay where the Vaporettos are, where you can see San Giorgio with its rounded dome. Not where you still can see The Bell Tower at Saint Marks square. But inside and cutting through the small alleys, maybe ending up on a dead end. Your nose close to a high brick wall with no openings, doors or windows. That’s Arsenale and behind the wall is the main basin where once hundreds of ships were built to maintain the Venetian domination of the Mediterranean.

Continue walking and maybe you’ll end up at Via Garibaldi. The one and only Via in Venice, named after the big hero who brought together Italy and created the Nation… At least that’s what they teach us. 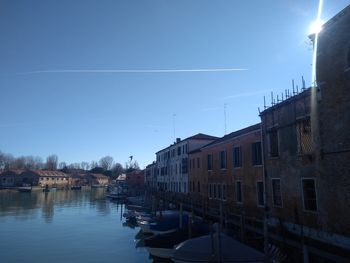 You follow the Via Garibaldi to the end and there is the canal, that used to continue all the way down to the Riva dei Sette Martiri before they covered it up and made a stone pavement on top. Like many other Calli in Venice, it became a street from being the sea.

Continue alongside the canal and end up at a very long bridge over to San Pietro.

Here you should visit the Basilica di San Pietro di Castello. This is where the first bishop was installed in the 8th century and it’s the first church ever built in Venice.

Here you can get lost without running into any problem. It’s a very small island and the canal around it is wide. Besides, there are only two bridges, one to come and the other to go away again. 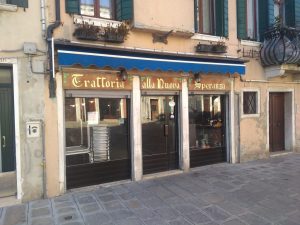 Now, if you get hungry you have two options. Walk back to Via Garibaldi, where you have a choice of places to eat, from very local cheap eateries to exclusive gourmet restaurants. Or you could continue walking, admiring the absolute absence of the touristic city we’re used to. Here everything is authentic.

If you’re lucky you suddenly find yourself in a small Campo. Actually, it’s not even a Campo but just a wider street; Calle Volto Ruga Vecchia. There you can admire the little boys playing football or the little girls also playing football. In the summer every kid in Venice plays football, it seems.

Look to your right and you’ll see a few tables in the square. And behind them, two windows and a door. That’s the Trattoria alla Nuova Speranza, New Hope. Just walk in and sit down and immediately the waiter will ask you what you want. maybe without even giving you the menu. If you come in winter they’ll have few things to chose from… Pasta al ragu, Pasta al Nero di seppia, Bigoli in salsa and you choose one of those. Then you ask for a carafe of white and some water. 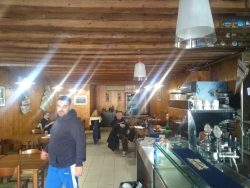 After that, you look around and notice that the tourists are gone. Here you are among the locals. And the English is gone, just like the Italian. Because this is the real Venice, where the real people live. And they speak the Venetian dialect which is very different from Italian. When the waiter comes with your wine and later with your food, you notice that the olive oil is in an old beer bottle. Then you relax. Listening to the sturdy sound of the strange language and enjoying the peace of mind that you get from a simple pasta dish and something to drink.

And you start to wonder about the name… A new hope, like the Star Wars film. Or like maybe there could be a chance for Venice to live on. Despite the millions of visitors, she could continue to be a healthy and functional city, where people actually live, love, work, grow and every now and then eat a plate of Bigoli with a glass of white wine.

2 thoughts on “Getting lost and finding the way”