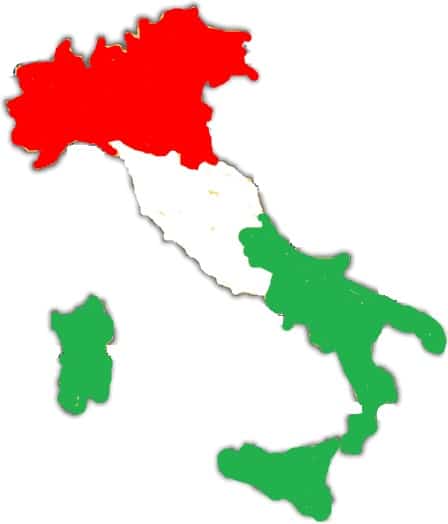 It’s not always easy to define what is north and south in a country that always was, and still is, very divided. Remember that the Kingdom of Italy was born as late as in 1861. And some parts were added after that. Venice, for example, together with all of Veneto was included in Italy after the third Italian war of independence, through a referendum in 1866.

The Italian language became understood in all of Italy more or less from 1914. When the first world war erupted, soldiers from southern- and northern Italy had to communicate in some way. And the common language was Italian. Before that, they spoke their local dialects. In Tuscany, they spoke Tuscan, in Sicily, Sicilian, and in Venice, Venetian. And the differences between the various languages are huge.

So, let’s decide where the borders are…

Northern Italy is down to halfway between Florence and Bologna. That’s where Toscana begins From there down to a bit south of Rome is central Italy, and south of that is south.

These borders are somewhat subjective, though. And there are really important variations between east and west as well… Come to think of it, there can be huge contrasts between the village on this side of the river and the village on the other side. Italy is extremely various.

And the reason is, of course, the Variety of the country itself.

The great contrasts have also fed hostility and distrust. Just think about the hundreds of wars that have been fought between the medieval city-states, and their allies, domestic or foreign. And in the end, a unified Italy became possible only after crushing the very powerful Kingdom of the Two Sicilies.

At the time, that Kingdom had the strongest navy in the whole Mediterranean sea, and one of the strongest armies. Defeating it was a key factor to be able to form the new nation. To get an idea of the importance it had for the new Italy, you just have to consider, that more than 70% of the new nation’s total net worth came from the Kingdom of the Two Sicilies. Naples was by far the biggest city in Italy, and it was the third biggest in all of Europe, after London and Paris.

But after the birth of Italy, the south, as in the Kingdom of the Two Sicilies, was badly sacked. Some would say mutilated. But it was of extreme importance that it wouldn’t be able to rise again to form a threat to the newborn nation. And from there a sort of segregation started, and from a certain viewpoint, it’s continuing even today.

What about the people who live in Italy, the Italians?

The northern Italians are spread out on an even more varied territory, than the southern- and central Italians. In the east, we have Trieste, an almost central European city. Similar to Ljubljana in Slovenia, and Graz in Austria… Or if you want Vienna and Prague. Going west you’ll find yourself on the southern slopes of the Alps with German-speaking areas, like Bolzano. In the west, there are the highest mountains in Europe with Monte Bianco on top of the list.

Going southeast from Monte Bianco, you pass the great industrial city, Turin, and then you hit Genoa and the Ligurian coast with crystal clear water and a mild climate. Heading eastward again, you will travel through the flattest part of all of Europe… The Po-valley.

La Pianura Padana – the Po-valley, was once seafloor. When it dried out it became an incredibly fertile vegetable garden.

So, the northern Italians have the best growing soil, the highest mountains, the best and most modern industries, and practically the only part of Italy where it’s easy to move around… It’s all flat, at least where it is flat.

And that made the northern Italians quite arrogant and cocky…?

No, actually they’re not. The northerners are not overbearing, presumptuous, or snobby. They are very down to earth, open-minded, and with a strong self-awareness. I’ve said it before, but the Italians, in general, are very easy to get along with. And they are generally very interested in other people from other countries and other cultures. Remember that Venice once was the center of the world. People from everywhere gathered there.

A simplified prejudice is that the in the northern Italy, they are hard-working, while the southern Italians are lazy. I, who know both sides very well, can honestly say that it’s not true. Another simplified prejudice is that in the northern Italy they are square-minded and that they lack fantasy, flexibility, and ideas for inventions, while southerners have all that. No, not even that is true.

One thing that is true though, is that many from the south have come up north to seek employment. The reason for this is that after WW2 most industries were in the north… In Turin and Milan. But even Venetians went to Turin to work on the Fiat-plant. There have always been movements inside the peninsula for work-reasons, or for other reasons. That’s not new.

There is a real issue though. There are differences that you’d notice if you travel through Italy. The northern Italians are not equal to their southern brothers and sisters. Just look at this Wiki. It’s a 20.000 words article all about the problems with the north-south inequality.

In the south the streets are worse, the hospitals are older, the trains are in worse shape, and the highways are fewer… And people make less money. The northern Italians claim that it’s because everything is cheaper in the south, and that is true. But it’s also a sign that something isn’t working as it should.

The central administration is addressing the issue though. The governments of various political colors, try to compensate, and they try to push the two parts together. The bonding doesn’t happen as fast as some of us would like, but things are moving forward. The fight against organized crime and corruption is proceeding, and the infrastructure is getting better all the time. Cities like Bari, Naples, and Palermo, which until a few years ago were rumored to be dangerous and disorganized, are slowly being transformed into clean, friendly, and well-run tourist-destinations.

I think all of Italy benefits from that.

So, there are no differences at all between the people in northern Italy and the southerners …?

It is impossible to generalize. Everybody is what he or she is, no more no less, if you come from this or there. First an furthermost we are all individuals.

Still as an answer to the question… Well, I would say two things. Two things that show if you’re from the south or from the north… Two things that could have consequences also for your personality and the way you confront life on our rolling ball out here, in the outskirts of the universe: