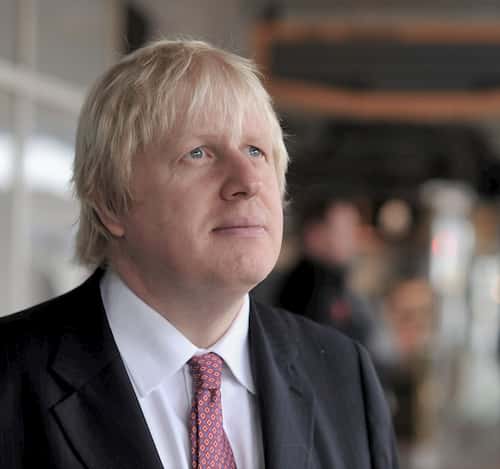 The complete shutdown of Italy

Venice has lost all of its income from the tourist sector. In Venice, Tourism/travel is the biggest industry by far, and almost all activities in the City have the travel business as its base. The close-down of the hotels is at almost 100%. Bars and restaurants are all closed. All museums, palaces and other tourist attractions are closed. It’s a complete shutdown.

It’s really incredible how fast it has been. It wasn’t long ago, only two weeks, that we still went to work, we still had our Ombretta at the bar and a few Cicchetti at the Bacaro, we still went to the supermarket, we still did all the normal things that normal people do.

The complete shutdown of Venice

But now it’s all closed down. Venice used to be the most crowded place in the world. So full of tourists, so full of people. A constant flow of attraction-hungry predators who hurried between the tourist sites to be able to take it all in… The beauty, the astonishing buildings, and the fabulous environment. The city of Venice that until a short time ago was concerned about stopping the flow, about putting an access fee to limit the rivers of tourists coming in every day…

Now it’s deserted. So few people still live here now. We’re only around 50000 and even without all the tourists, without all the visitors, but with only the residents, it would be quite empty.  As almost everyone is staying home these days, the city has become a Ghost Town. It’s scary. You can walk over Saint Mark’s Square at lunchtime, in the middle of the day without meeting anybody. Nobody is walking around taking pictures, nobody is on his way to the Basilica. But not even a stray local, someone who missed the Vaporetto and is going home by foot, or somebody who’s just walking over the piazza to get somewhere else… It’s deserted.

And it must have been 50 years since the last time that happened.

The latest decree says that being outside is off-limit… Any outside. You can go to the supermarket, or the pharmacy, but to no other shops. Anything but alimentary supplies have closed anyway. You can walk the dog, but most dog owners just walk them around the block and hurry inside. The dogs are having the time of their life though. They’re handed over to friends and family as the indoor life with all kinds of friction and frustration, gets difficult.

the enormous strain on the Italian economy is a big… a huge issue. Italy never had a well-organized industrial production structure. The Italian economy is mostly based on mid-size- and small companies, many kept strictly within the family. With smaller markets and less capital readily at disposal, these companies are more vulnerable. The government in Rome already has decided on more than 25 billion euros to assist the regions.

But there’s also a longer perspective to keep in mind: Schools and universities are all closed. If the emergency situation goes on, they could end up losing a whole year. Think about that for a minute. Every child, teenager, and young adult would have to redo the school year. 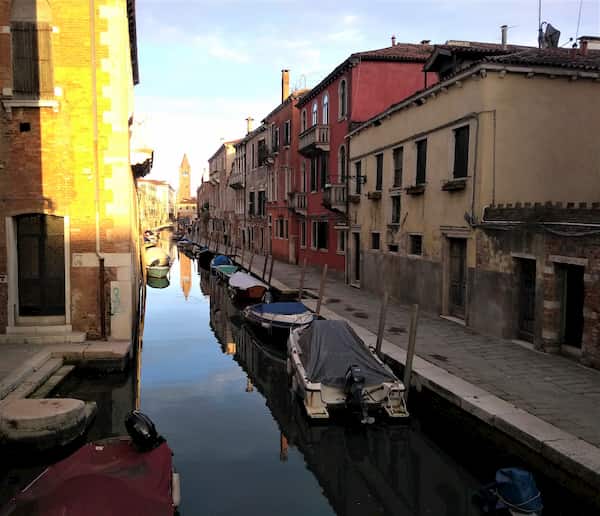 For us here in Venice, as in many other tourist destinations, it will take a lot of time before the tourists return. It’s not like you switch on the light and everything goes back to normal. It will take months, years even before we are back to normal.

The money, the industry, and the tourism

Italy was in economical distress before the COVID outbreak. Now we are in an even worse situation. Still, the government, most of the opposition, the Italians, the industry, all try to do what it takes to contain the disease and make the consequences as bearable as possible. Italy is the second most affected country in the world, after China. In Italy, it’s a major crisis that will have an impact on all of us for a very long time.

We are in the lead. Italy is two to four weeks before everybody else on the timeline. From our point of view, everybody else will follow. There should be absolutely no doubt about that. The COVID-19 will continue to travel over the world, just like any seasonal flu.

It’s not an Italian problem, it’s a global problem.

The figures all point in the same direction. And not only the figures, what the health experts say… From “We are well prepared, there’s no danger”, over “We are concerned, but we have so far no indication of any domestic transmission of the virus, the mortality is very low, and only elderly with background-pathology are at risk.”, til “We have to take drastic measures…”, to what the politicians say, and what the community thinks. We know because we’ve seen it before. It’s identical to the Italian situation.

Every country in every corner of the world will have to do exactly what Italy has done… A complete shut-down. 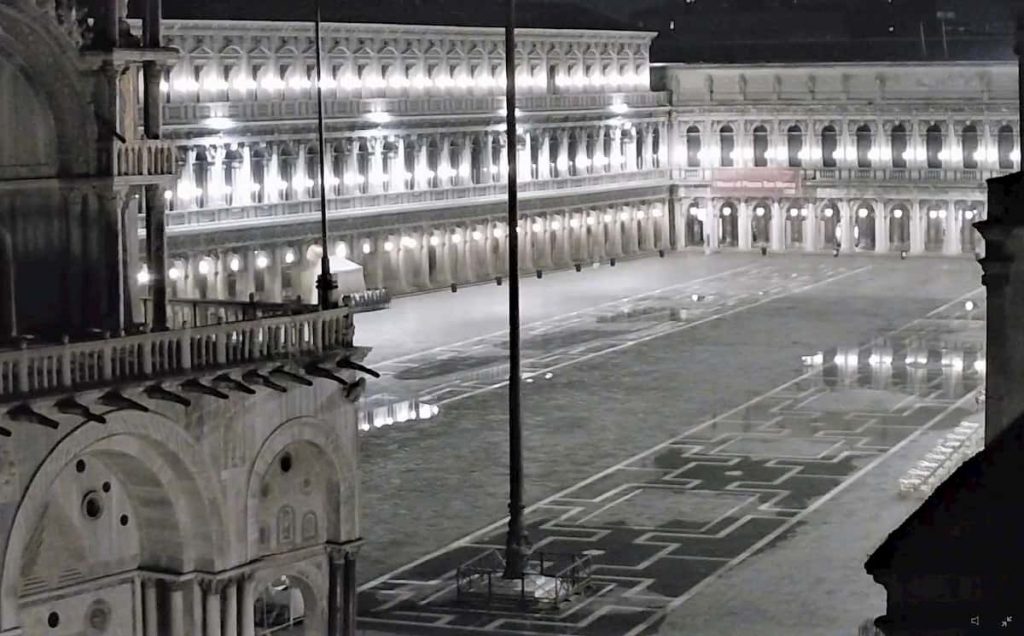 The idea is, simply put, when enough people in a community have developed immunity, it will be so difficult for the virus to continue its life-cycle and transmitting its disease, that it will die out by itself. It will starve to death. It’s a kind of natural vaccine. In this way, you could create a resistance to the pestilence without having to wait a year or more to develop a vaccine.

Government representatives elsewhere have expressed similar ideas. When the numbers of cases increase, you soon arrive at a point where the healthcare just cannot cope anymore. Many countries are now closing in on that scenario, as the positive numbers accelerate. What would happen if Germany instead of a few thousand had a few hundred thousand sick? And if France instead of 4000, had 40.000 or even 400.000. It’s easy to see the system’s potential shortcomings in front of an epidemic of that magnitude.

So, if we can’t beat them, join them.

Maybe not join them, but let the Coronavirus do its job and we just try to flatten the curve a bit… To create at least the possibility for the hospitals to function while the virus is around.

… Indicating that it’s dangerous to suppress the disease.

“What we don’t want is everybody to end up getting it in a short period of time so we swamp and overwhelm NHS services – that’s the flattening of the peak,”

He continues declaring that stopping mass events like football games, and other sports events are eye-catching but have very little effect. People are much more likely to be infected at home, or in other small environments.

… Indicating that, for example, an office or a factory could be much less problematic if a few measures of security were to be implemented. It’s better to work than to stay at home.

“You can’t stop it, so you should end up with a broader peak during which time you’d anticipate that more people would get immunity to this.”

So, how many infected do we need to achieve this Herd-immunity?

“About 60 percent is the sort of figure you need…”

What is herd immunity? … And how do the numbers work?

And if Britain decides to go down that path, they will probably pull everybody else with them. Because COVID has no borders. The idea of Herd immunity is that at least two-thirds of the population is immune, the virus should self-die. But it would have to include everybody, also those outside Britain.

And all of us? We who live outside of Britain?

Unless Britons are supposed to close and seal the borders for a year or two until we have all overcome the pandemic and no virus is found nor inside nor outside the country. Otherwise, the Herd immunity must include the rest of the world as well. And now we’re talking 7,8 billion. 60% of the whole world is 4.620.000.000 people. 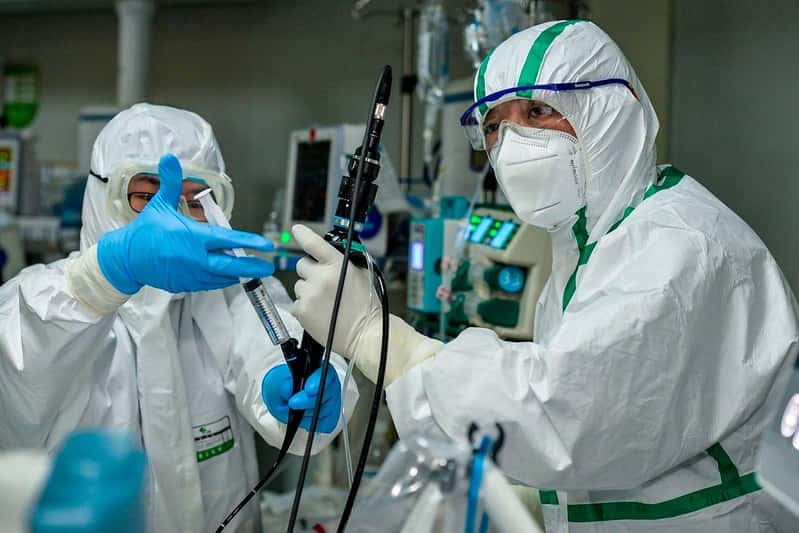 If the idea is to create Herd immunity only in Britain, then the Britons would have nothing to lose going abroad, while other countries would have to stop them from coming. One can easily anticipate the diplomatic problems that could arise.

What is herd immunity? – The death rate.

But these figures aren’t reliable. We still do not know the exact death rate. Many could be flying under the radar, as often the symptoms are so mild that the infection is not detected.

That is a death rate of around 7% based on the total infected. Compared with those who actually have recovered, that figure is so disturbing that I don’t even want to calculate it. But let’s stay at 7%.

Even if it’s just half of that, it’s still more than 150 million people.

And if we consider the possibility that if everybody gets exposed to the virus, then everybody could catch the disease.

7% of 7,7 billion is 539.000.000 people. Half a billion dead mothers, fathers, grandmothers, grandfathers, children, and grandchildren.

I don’t know if it’s a joke. Maybe they’re just pulling a prank. But I see a tendency among other countries, Belgium, Sweden, Germany, and others who are desperate because in just a few days the Coronavirus-situation has gone from observation and concern to panic. In the current world situation, this could be a very attractive solution… You can continue with the production industry, the service industry, schools, public service, and everything else.

And you could liberate yourself of a big part of the citizens. The one slice that is not productive, costs a lot and occupies the so well-needed hospital beds. You could ease their pain and just let them cross the river Jordan.

What is herd immunity and where does Patrick Vallance get his info from?

Where did Patrick Vallance get the idea that “You can’t stop it…” from? Who informed him about that? Does somebody know that? Is there some secret scientist society somewhere that already has resolved the mystery of the Coronavirus?

And we do not fully understand the immunity to the COVIC-19 after recovery, or how mutation of the virus could possibly alter the spreading, risks, and death rates.

China has a positive development now. South Korea has a curve that is flattening. We just hope that soon Italy will have some of the results we now see in the east.

We urge you to think again.

Dear Patrick Vallance, and dearest Prime Minister Boris Johnson… Try to learn something from those who have experience of the disease. Instead of playing around with the lives of hundreds of millions of people, look around… Open your eyes…

Listen, and watch what those, who were there before you, did. The governments, the doctors, the nurses, the health authorities, the scientists, and the little people in the countries that have already gone through what you are dealing with now.

And do not ruin the efforts of other countries… Countries that are fighting a new and deadly enemy, and actually try to save their people by doing so.