Today, Sunday, June the 2nd 2019 there was an accident with a cruise ship in the Giudecca canal in Venice. Around 8.30 a.m. the Opera, a 13-stories high and 275-meter long ship of MSC cruises lost control and crashed on a bank involving a passenger boat.

As seen in the video, nothing really tragical happened. The ship came into the quay with a very small angle and at that precise point, the harbor is equipped with structures that can hold big vessels. It’s in concrete with heavy steel reinforcement. And the ship landed between the quay and the passenger boat and pressed the other vessel outwards instead of downwards.

5 people were brought to the hospital, none in serious conditions.

The president of the Port Authority of the Northern Adriatic Sea Pino Musolino was urgently summoned to Rome by the Ministry of Transport, to explain how this could happen. But like so many times before and like in so many other fields, the difference between probability and actual facts is huge.

This is not supposed to be possible. The security measures are too strict. Still, this is not the first time.

In May 2018 another ship, Marella Discovery, 264 meters of length and 50 meters high, was drifting out of control for half an hour in the middle of the Giudecca-Canal. She too was dangerously close to the Zattere side before three tugs were able to pull her away. And before that, there have been other incidents.

Are we really going to trust luck to keep Venice and the tourists as well as the Venetian safe?

Because it was pure luck that prevented a serious cruise ship accident this time too. 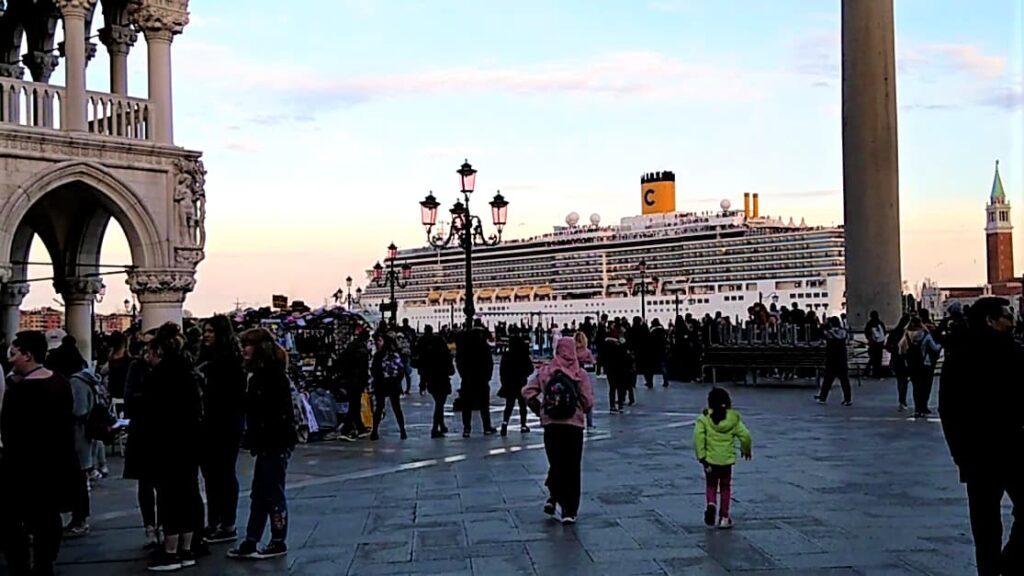 The ‘MSC’ “Opera”, with 65,000 tons of tonnage, was unable to stop. She had the engine damaged, but “somehow continued pushing ahead”, an officer of one of the tugs in service, explained. She continued to accelerate, and in the end, even the hawser of the tug that held it back broke. The marine ‘skyscraper’ continued, scraping away a piece of the quay, then hit the ‘River Countess’ on the stern, a tourist riverboat, where 110 passengers were sitting calmly eating breakfast, before the scheduled trip on the river Brenta. There was plenty of time for them to see the giant coming towards them and people started screaming, running away in disorder falling, then getting up again to escape the monstrous steel mountain coming straight at them.

So, this time it went well.

A disaster was avoided. But what if the ship had had a different angle? It could easily have cut the smaller boat in two and drown everything and everybody on it. And what if it had come against the quay a few meters earlier? At Zattere, where the foundation is the normal wood poles and marble? And if the angle was greater? It could easily have pulled down half of Venice. It could have destroyed hundreds of palaces and killed hundreds if not thousands of children, men, and women. Tourists and locals alike.

–  I saw the bow approaching and I thought it would reach my house”.

The words are those of a Venetian lady, living in Santa Marta, describing what she saw.

–  I was on my terrace, on the fourth floor and I can see the Giudecca canal very well. When I saw the bow of the ship approaching towards us it seemed it was coming straight at me. There was a deafening noise, all the horns sounding. All I can say is that fortunately, it went well… This time…

A recording has emerged of the captain of a cruise ship describing an engine fault.

Speaking with the harbormaster he says the engine is locked but in thrust. He also said he had dropped two anchors but that didn’t stop the ship. The tugs tried to widen the gap between the ship and the deck but as one of the cables broke the bow tug couldn’t do anything more than just watch how the 275-meter ship hit the smaller passenger boat.

The captain sounded the horn continuously in an attempt to warn tourists on board the docked boat ahead of impact.