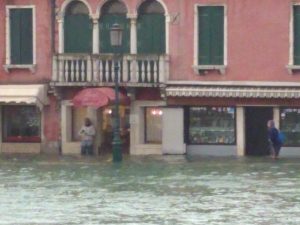 Monday the 29th October 2018 at 3 p.m. the water level reached 156centimeters over standard sea level. That’s the fourth-highest level since the measuring started in 1923. Around 75% of the city is flooded and in most places, even rubber boots aren’t enough. You need waders if you don’t want to wet your feet. As most tourists do not bring waders when they go to Venice, you’re left with two options… Stay in your hotel or get your feet wet. Many of you choose the second alternative and right so. Feet can be cleaned and dried. 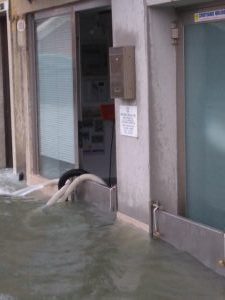 Then there are the shop owners and Barkeepers.

For them, a day like this is a nightmare though. Their establishments are always on street level. They try desperately to keep the water out but it’s a battle they can’t win. Water has a bad habit of getting through anyway; anyone who’s spent a rainy night in a tent knows that. First, they block the doorway with a removable bulkhead of wood or steel, bolted to the doorframe. If water is at these extreme levels they might have to top up with one or two panels over that. Then they use sealant under, over, and on the sides to prevent the water from coming through. Inside they use submersible pumps to keep the levels as low as possible because all these precautions are more or less futile…

Cause the worst part is the infiltration from the drains. Venice is a floating city and the water is underneath us. If the outside level raises, so does the water we’re sitting on. So even if we can keep the outside water out, it still comes up from the drainage… And that water is not nearly as clean as seawater. 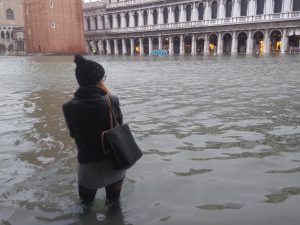 At a certain point, police closed off San Marks square. They claimed it was for security reasons. True or not true the water was roughly 70 centimeters high.

The record this time was 156 centimeters. We talk about these numbers and every Venetian knows what they mean. It’s really centimeters over the medium sea level in Venice (Punta della Salute) as it was in 1897. 95/100 cm is where problems really start. At that point, you can no longer walk around unaffected with normal shoes. Depending on where you’re heading you will find yourself blocked by flooded passages. In the most frequent areas, they set up “passerelle”, a temporary footbridge made by a steel structure on which a wood panel is placed. But these are often crowded and slow. At 130 cm it can be difficult even with rubber boots. Yes, and at 156 cm you need waders.

Another problem with these levels is that when water reaches the panel placed on top of the steel structure of the footbridges, they don’t lie down on top of the steel anymore but float away. As long as people stand on them they stay in place but when they don’t have anyone on top, they escape. That’s what happened at the Vaporetto-pontoons around 150 cm. People just couldn’t get safely to the boat. So they closed all traffic around 2.30 p.m. It started again at 5 p.m. when the water was down a bit.

All schools in Venice and Mestre were closed Monday and Tuesday.

So on top of all this, we also had to keep our children at home, with nothing to do… Park was out of the question and no one was into football. The only good thing about high water is that it’s a tide and it ends. After a few hours, it sinks. The drying up takes a lot more time though.

It can seem an exotic event, and foreign newspapers often write about it with a tone of excitement. You see pictures of San Marco flooded, maybe with a gondola in the middle.