The glorious republic of Venice and the building of an Empire.

At the beginning of 800, the city in the lagoon was a reality. Though it was small and insignificant, and not really a city. More like a few islands in the mud, with some buildings on top. But it was the capital of the Republic of Venice, it was the bishopric, and it was well defended. A few years later they got their saint, Saint Mark, and the stage was ready for the play. Building houses and churches are one thing, but these were hard times for anyone trying to build an empire. And the Venetians were doing just that.

If you look at a map at the beginning of the 9th century, you see the tiny republic of Venice squeezed in inside the huge kingdom of the Franks. And the Franks were very powerful and dangerous. At least until 843, when the vast territory was divided into three parts, the west, the east, and the middle. This latter part was ruled by Karl the Great’s grandson Lothair I. When he died in 855, that kingdom again was divided into three parts. The Franks in Italy would later become the ground stone of the Holy Roman Empire, but for now, they were weakened.

On the eastern side, they had the Byzantine Empire, who was equally powerful, but contrary to the Franks, the Byzantines offered protection and collaboration.

The path to dominance

So the lagoon city-state started to grow. To start an empire, you normally need land and money. The Republic of Venice didn’t have any of the first so they had to find a way to get a lot of the second. To do this, they had some very important advantages. It was in a safe place, lying right there inside the impenetrable lagoon, it had a very strong naval tradition. And it was situated in a strategically perfect position, with access to both the central European inland, by land, and to the Mediterranean sea, by boat.

So they started trading and Venice soon became an important crossroad for many of the most desirable goods for the European market, oriental spices, silk, and precious stones. To travel the Mediterranean from north to south, from east to west, they needed military power. They had to have safe ports and they needed a flag that imposed respect and fear.

This was a time of great confusion. The Italian peninsula was divided into many city-states. On the eastern side of the Adriatic, there were Slavic tribes as well as Dalmatian pirates, and there was the Papal state, often allied with what was left of the Frankish empire. But the Republic of Venice had a big brother, someone to call if they got bullied. And that was the Eastern Roman Empire, the Byzantines. They and the Venetians had a close relationship, they shared the history of the Roman empire, and helped each other. At least for now and for several hundred years to come. That would change drastically, but let’s not jump ahead…

The Byzantine-Republic of Venice brotherhood

The Arabs were another power that had to be dealt with. After the Islamic revolution in the 7th century, the Arabs conquered and held most of the southern and eastern shores of the Mediterranean. Often they worked well together with the Italian naval city-states and Constantinople, but every now and then it came to hostility. As in 840, when they took Taranto and in 842 when they occupied Bari, both in Apulia on the Italian heel. Venice and Constantinople tried to get rid of them, but it wasn’t until 867 that the united forces of the Byzantines, the Italians (Franks), and Venice, guided by the Doge Orso I Partecipazio, were able to win back the whole coastline, including Bari and Taranto.

That victory was extremely important for the Republic of Venice. They single-handedly freed Taranto and with that, they demonstrated that they were a military power to be reckoned with. From there the bonds with Constantinople were strengthened. Venice now had a very privileged relationship with the Byzantines. They were protected throughout the eastern Mediterranean, and they had access to the Byzantine network of strongholds and ports. 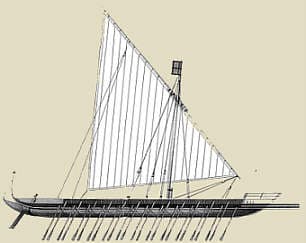 If you look at the map again. From the beginning up until 1200 somewhere, Venice wasn’t much more than the lagoon. They didn’t have any land to talk about. So how come they became a naval power so strong that even the mightiest of the Sovereigns at the time feared them? And in so short of a time?

Well, surely one reason was the Thin Galley.

It started to appear at the end of the 9th century. This ship became the foundation on which the military power of La Serenissima was built. It was a slender Galley with little or no deckhouse. Uncomfortable for the sailors, but it was a deadly opponent in war, because of its agility and speed. And it had oars as well as sails, so it always came out on the right side regardless of the wind. Because they had to have men to the many oars, their manpower in battle was huge. As naval battles in those days were almost exclusively man to man, these ships were very powerful. As well as manpower, they had a ram at the bow to sink anyone who didn’t get away fast enough.

Later, with the construction of the Arsenale, the Venetians could build up to two of these a day, in a production chain that had to wait until the 20th century to meet its equal. 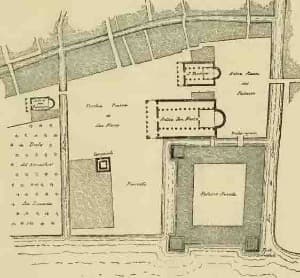 At home, the wealth from all this trading started to give the artistic form to the city. Immediately after Venice had become the capital of the Republic, the construction of the three most significate buildings started, The Doges Palace, The Saint Marks church, and the Belltower, although nothing of these original structures remain today. There were quite a few religious buildings, as the Catholic church was the only one with enough gold to start projects like that, apart from the state. The churches of San Pietro in Castello, San Canciano, and Chiesa di San Polo are some.

But the churches and the Doge’s Palace were more or less all. There wasn’t really much else to mention. It still was a community on several islands, not connected with one another. And it still was a rather wet and muddy existence between the simple houses. The Saint Mark’s Square was a field with the river Rio Baratario in the middle and on the other side of that, another small church: San Geminiano. 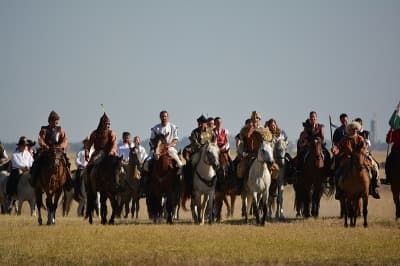 At the end of 800 and the beginning of 900, there was yet another great kingdom coming to raid the Italian east coast, the Hungarians. They had a short period of greatness, when they conquered vast lands on the Balkan from the Byzantines and came all the way into Veneto to raid the Italian cities of Padova, Treviso, and Altino. The Venetians beat them and drove them back, but as a result, the Doge Pietro Tribuno decided to build a defense wall from outside the Palace, all the way over to Olivolo, today’s Castello, more or less where today’s Riva degli Schiavoni is. And that was the beginning of connecting the various islands to become one city. Before that San Marco was isolated, as were all the other parts of Venice. 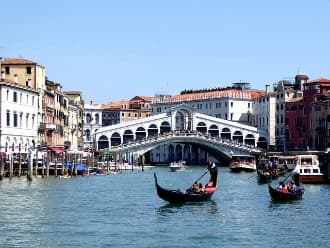 Some 200 years later the first bridge over the Grand Canal was built. The bridge was a very simple pontoon-structure and the Grand Canal was still a branch of the Brenta, the river running through Padova. That bridge, that later would become the Rialto bridge, connected San Marco with San Polo. And thus the central part of the city was made.