Here’s link to my hotel page if you already have an idea of where you want to stay.

Where is it best to stay in Venice? Should I opt for a hotel close to the main attractions around Saint Mark’s Square or would it be better to lodge away from the crowds? Maybe it would even be better to find a place in Mestre or Marghera? Adding to all this there’s also the price consideration. Where do I get the most for my money?

The questions are many. And the answers are even more and often difficult to understand for a first time visitor. If you want a list of very good hotels in Venice, places where you definitely will not be disappointed, then look over here.

What I’m going to do in this article, is try to give an idea of in what area of Venice it could be good to try and find accommodation and some consideration about why. Venice may be a small town but it can be a very different experience to stay close to Saint Mark’s Square compared to f.ex. stay on Lido or on Giudecca. Before booking a hotel you should know a few things…

First of all… Venice is crowded.

Around 54.000 inhabitants but many don’t really live here on a day to day basis. Some people say that as little as between 30.000 and 40.000 actually sleep here every night. 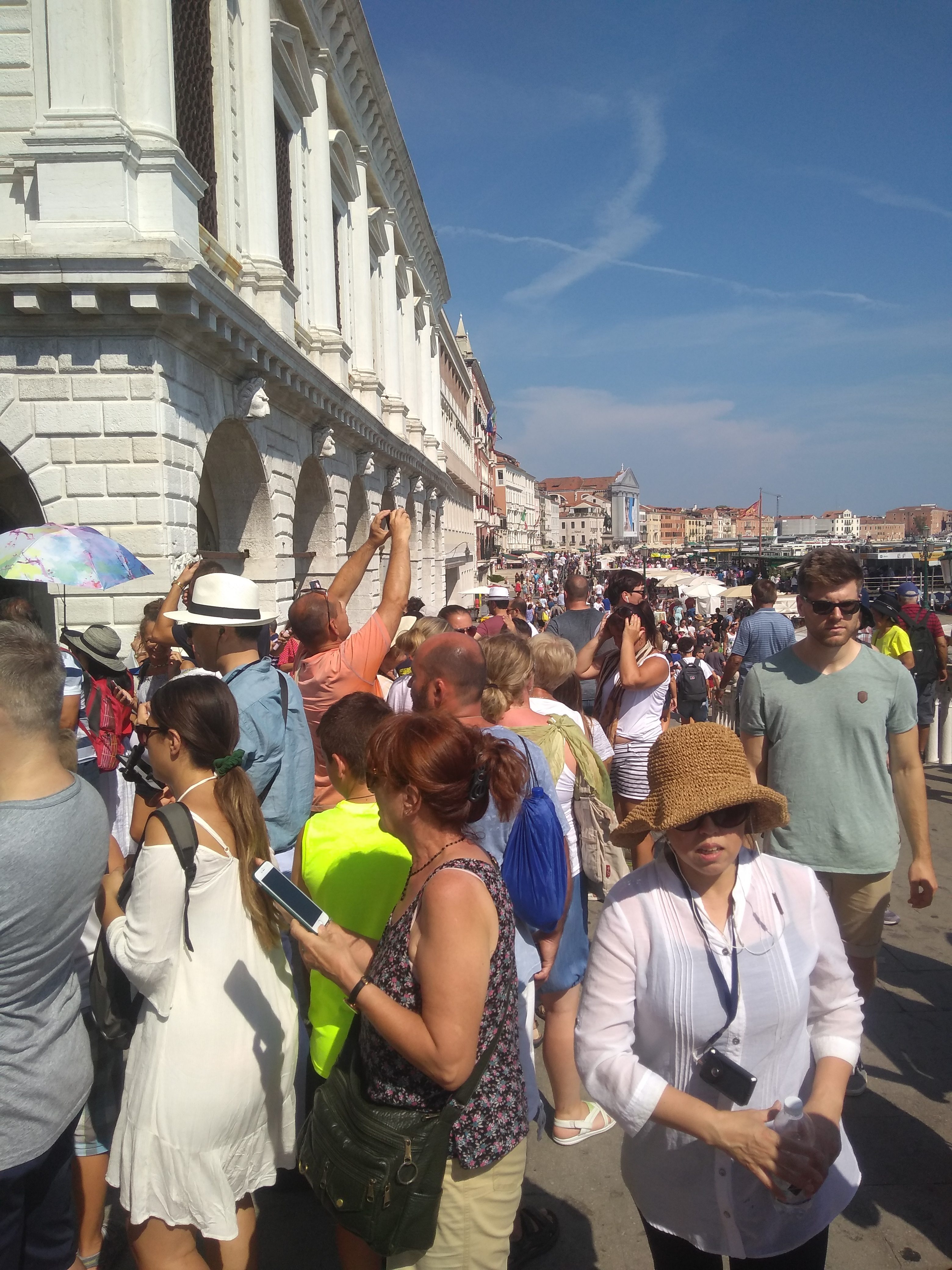 To this comes some 25 million tourists a year, sleeping in Venice, sleeping on the mainland or just coming in for the day.

Any way you look at it that’s a whole lot of tourists in a very small town.

A few years ago there were two periods of the year that were a little slower:

1. From November to mid-December before the Christmas-rush kicks in.

2. From after New Year to mid-February when the carnival starts.

Now these periods are reduced and soon they’ll be completely gone, and Venice will be full of people all year round.

Fortunately the tourists… you… are pretty much concentrated to certain areas, San Marco, San Polo central parts, Dorsoduro eastern parts. While in other places, Cannaregio, Santa Marta, Castello, Giardini, Sant’Elena you can easily find yourself completely alone or only with the locals.

Another thing that is unique about Venice is that, as I said before, there are no suburbs or large residential areas outside the city. In Venice, you’ll be doing a lot of walking but you are never far away from the tourist attractions because they are spread all over. If you stay close to Saint Marks square, you will still have to walk to get to… let’s say the Ghetto or l’Arsenale. It does matter somewhat where you stay but there is no such thing as outside the main touristic trail. Wherever your hotel is, it will be close to something and far away from something else.

One thing to consider is that you have to carry your own luggage. Unless you hire a porter to carry it for you.  Anyway, if you’re old or have a bad foot or something, try to stay close to public transport or at least close to the canal where the taxi has access. I’ve seen too many tourists sweating with tons of bags trying to reach the train station or Piazzale Roma by foot. Over the many bridges but under the burning sun. 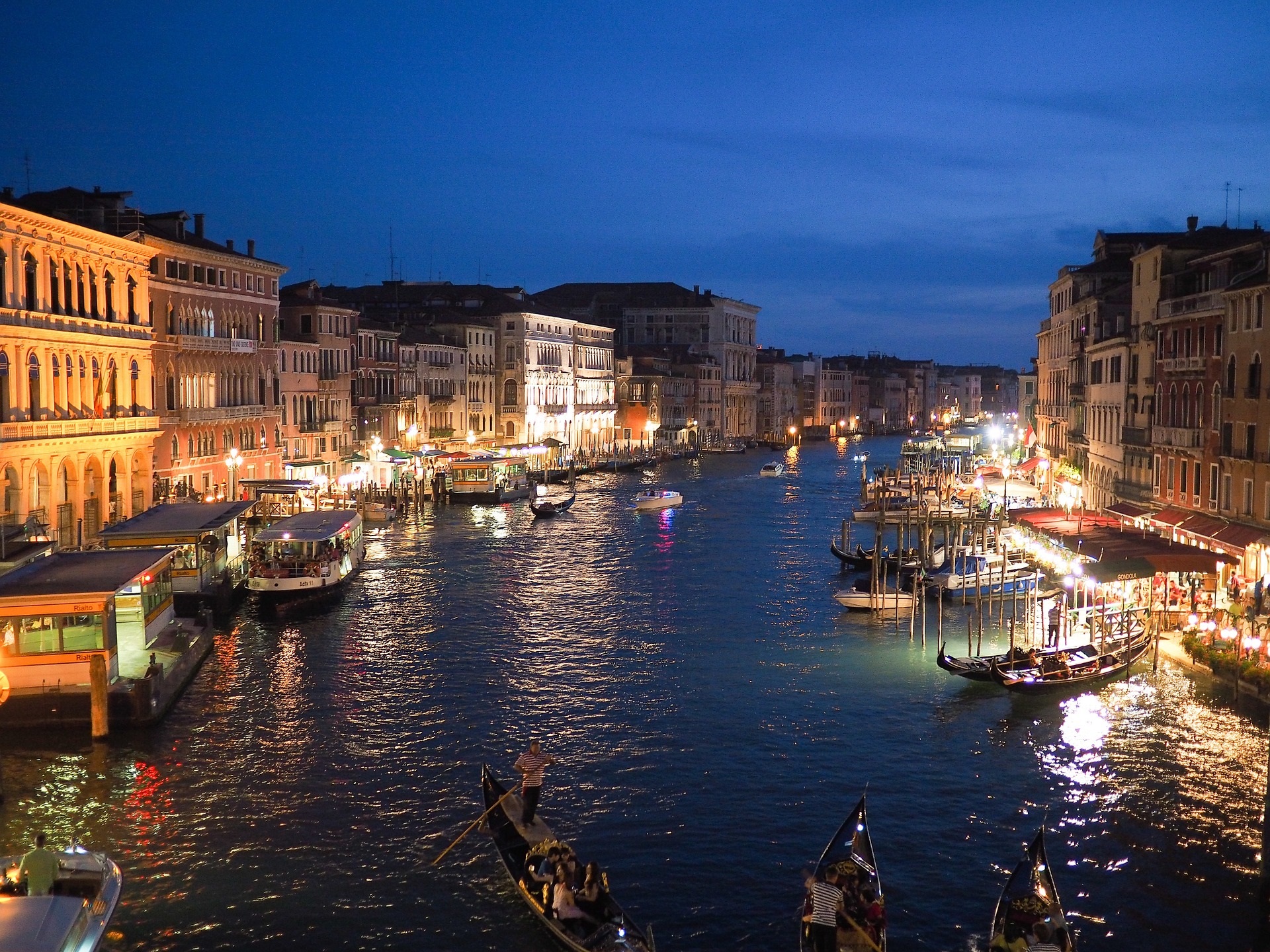 So if you want the crowded center, you would look for a hotel around San Marco, the close by Riva degli Schiavoni or on the Grand Canal. This is where the classiest accommodations are. This is also the most expensive alternative. Although luxury hotels can be found everywhere.

If I would go to Venice for a few days… If I wasn’t already living there that is, I would consider Cannaregio, the northern part. Here the atmosphere is more laid back and you have a chance to find something genuine to eat and drink if you look around. And you do not only meet fellow tourists.

My real favorite though is further east: Castello around Arsenale and in particular the one and only street in Venice: Via Garibaldi… 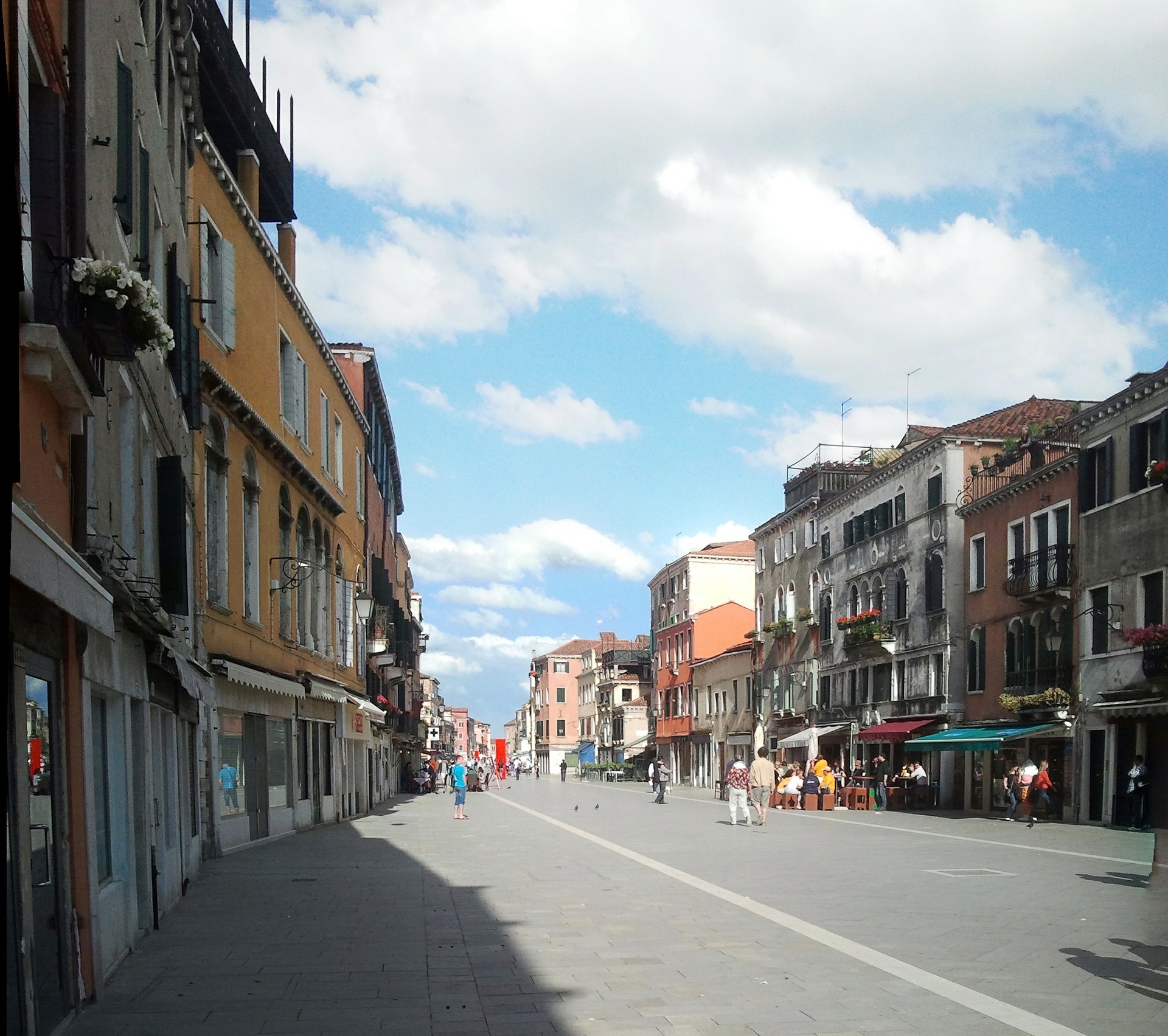 Many of the streets in Venice are called “Calle” or “Calli” in the plural, with the variations: Calletta (narrow street), Calle larga (wide street), etc. Via Garibaldi has the “Via” before the name which is the normal Italian word for street. There is also one famous “Strada”, namely “Strada Nova”. Strada is the Italian word for Road/Way. The others are “Calli”. The word “Calle” origins from Latin “callis”, path. Interestingly the squares are not called squares but fields, “Campo” in Italian. These nominations come from a time when Venice was much more rural. There were grass and trees, animals and crops all over. Actually long ago many squares, “piazze” in the rest of Italy too, were called fields, “campi”. Then, at some time; they all felt that it was more civilized and maybe more noble to call them “piazza”. In Venice, the old names remain and perhaps that tells us something about the mentality of the Venetians.

If they have one street and one road, they also have one square, “Piazza S…”.

Here you can experience some of the old Venice ways of living. The old man fishing from the dock with the rod in one hand and a cigarette in the other. The children playing football against the wall, with the shop owners having to put steel bars in front of the windows. Not as a protection against thieves but against little future Ronaldo hitting the ball with all they got… Laundry hanging from one side of the street to the other and the old woman getting her daily bread and tomatoes in a basket on a string and then pulling it up to the window on the third floor.

Further to the north, you have Arsenale and to the southeast first Giardini and then  Sant’Elena, the last island before you hit the sea. This is a wonderful, peaceful paradise, but now you’re getting very close to the real Venetian lifestyle… And there are few hotels here. Still, out here the rhythm is much slower, the days are more about where to eat, drink and how to be able to take a nap after lunch than running around on museums. And if you would like to try it out there’s an awesome hotel, one of the few, right here.

If you are on a tight budget, you could look to the mainland. In Mestre and Marghera prices are much lower. There is no way around that. For the price of a small 2-star hotel in Venice, you’ll get a 4-star suite in Marghera. But you’ll have to weigh pros and cons… Every morning you will have to spend half an hour on a crowded bus. And every evening, after your romantic dinner you’ll have to walk back to Piazzale Roma to try to sneak on the jam-packed bus to get back. And you will fall asleep to traffic noise instead of the soothing sound of the waves of the lagoon… Well maybe not lagoon waves but still there would be no traffic.

Another alternative is looking in the other direction… Towards the sea.

In Lido di Venezia, the long island that defines the lagoon and separates it from the sea, you could also find hotel deals. Not in the summer because Lido is also a beach destination. This means that in summer prices go up and in winter they go down. It could still be a good choice in the warm season if you want to combine Venice with some swimming and getting a nice tan.

The other alternative is Cavallino. This is the long string of sand north of Lido. Here prices are much lower than on Lido, the beaches are better and you can come here by car. The trip to Venice is longer, 35 – 40 minutes plus transfer to the boat. But instead of standing on a bus you’ll be sitting on a boat.

The other island Pellestrina, south of Lido is out of the question. It is a very nice day-trip but you can’t stay there. It’s too far away.